The U.S. economy is on the mend, but the patient appears to still need substantial care. Jobs are being added at a snappy pace — 288,000 in June, with unemployment falling to 6.1% — but GDP growth remains weak, just 2.1%. And after gains in the crucial housing market in 2012 and 2013, construction starts declined 9.3% in June 2014 — not a good sign given housing’s importance to the economy as a whole. These trends affect all communities large and small, and for reporters covering these issues, nuance — and data — matter.

The latest report from Harvard’s Joint Center for Housing Studies, “The State of the Nation’s Housing, 2014,” explores the challenges facing the sector, which on average makes up nearly 5% of U.S. economic activity. The authors see a range of factors holding back housing demand and household formation, including tight credit, lingering unemployment, stagnating wages for those who do have jobs and rising student loan debt. All these in turn are suppressing economic growth.

Among the report’s overall findings: 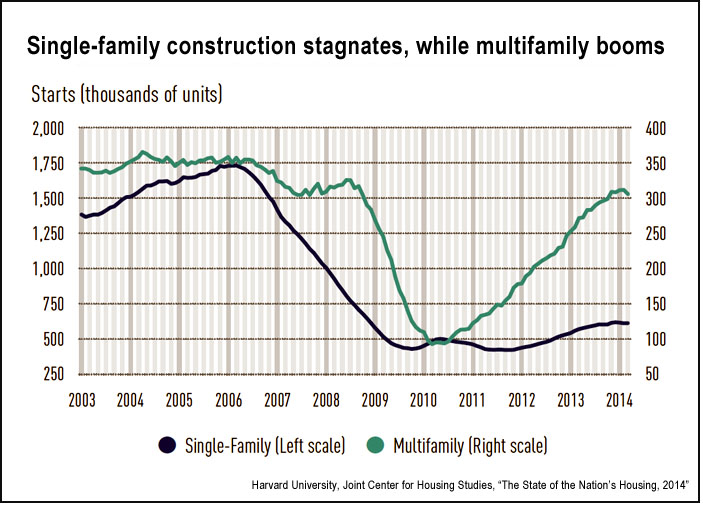 Following on trends reported in the Joint Center for Housing Studies’ 2013 report, the number of renters continues to rise. Findings in the new report include:

As boomers age and the U.S. population becomes more diverse, demographic change is likely to accelerate in the coming years:

Related research: Another 2014 report from the Joint Center for Housing Studies, “America’s Rental Housing: Evolving Markets and Needs,” examines the demographics of those who rent, the housing stock and its condition, construction trends and public-policy challenges now and in the future.

The state of the nation’s housing, 2014: Rentals up, homeownership down, minorities become a force