Much research and media attention has been devoted to exploring rapidly emerging African countries in recent years. In addition to extraordinarily high GDP growth rates, many African countries have seen their middle classes grow substantially and demand goods and services that were formerly available only to individuals in more developed countries.

Case in point: In 2011 the continent had 650 million mobile users, making it the second-largest market in the world after Asia. It also has the fastest-growing cell phone market in the world, maintaining an annual growth rate of almost 20% since 2007. This has both contributed to economic development and lead to innovations and improvements, from mobile banking to faster communications between merchants and customers, as the World Bank notes. In Kenya, the success of the mobile banking system M-pesa has opened the door for tech startups, prompting some to refer to the country as the “Silicon Savannah.” (It should be noted, however, that mobile phone technology in Africa frequently does not afford robust Internet access, with all its innovation potential.)

The widespread use of cell phones and social media in Africa has also had profound political repercussions. New technology has often credited, rightly or wrongly, with playing a key role in the Arab Spring, which sparked protest movements throughout the Middle East and North Africa. In Mozambique, cell phones have been shown to improve voter education and political participation, while in Namibia cell phone usage has allowed citizens to hold their government officials more accountable and reduce corruption.

While there has been significant research on the positive impacts of the rise of technology in the developing world, the potential downsides have received relatively little attention — for example, its ability to improve the ability of violent groups to organize and incite conflict. A 2013 paper from Duke University and the German Institute of Global and Area Studies published in the American Political Science Review, “Technology and Collective Action: The Effect of Cell Phone Coverage and Political Violence in Africa,” examines the impact that cell phones have had on violent conflict on the continent.

The authors, Jan H. Pierskalla and Florian M. Hollenbach, utilize conflict data from the UCDP Georeferenced Event Data Set, which includes data on organized violence from 1989 to 2010, and data on cell phone coverage from the GSM Association, a global association of mobile phone service providers. The authors use various statistical techniques to account for economic, social and geographical factors related to conflict and to determine whether there is an association between cell phone coverage and violent conflict in Africa.

“We do not believe that the spread of cell phone technology has an overall negative effect on the African continent,” the researchers state. “The increase in violence induced by better communication might represent a short-term technological shock, while the positive effects of better communication networks on growth and political behavior may mitigate root causes of conflict in the long run.” The authors suggest that more research must be done to determine how communication technology, such as cell phones, impacts various forms of collective action, whether violent or non-violent, in Africa. They also note that an earlier paper on the connection between cell phone capacity and violence, “Is the Phone Mightier than the Sword? Cell Phones and Insurgent Violence in Iraq,” observed the opposite effect: Mobile technology was associated with decreased insurgent violence in Iraq.

Related research: The World Bank’s 2012 report “eTransform Africa: The Transformational Use of Information and Communication Technologies in Africa” examines a wide variety of areas, including agriculture, health, education and governance. The report discusses the implications of Africa’s so-called “mobile decade.” 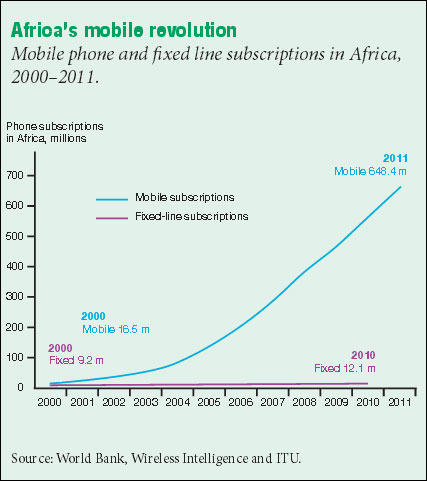 New research finds that legalized abortion following Roe v. Wade accounts for 45% of the decline in U.S. crime rates over the past three decades. Some other economists are not convinced.

Technology and collective action: Cell phones and violence in Africa