From highways to subways, power lines to the Internet, hospitals to firehouses, developed nations run on infrastructure. But as vital as all these infrastructure projects are, they’re also expensive, and once built, they require maintenance and, eventually, replacement. Yet with tight state budgets and difficult finances, maintenance is often deferred — sometimes with disastrous consequences — and mega-projects that once moved forward inexorably are often delayed or cancelled outright.

While bumping up property or sales taxes might once have been the way to go, voters have shown growing reluctance to support such increases. Fuel taxes, which traditionally fund road projects, have also fallen as people drive less, more workers telecommute, and legislatures hesitate to increase tax rates that have fallen in real terms.

To move forward in such challenging fiscal and political times, more municipalities have been choosing to fund infrastructure projects through tax increment financing (TIF). It allows municipalities to sell bonds based on anticipated tax revenues that infrastructure improvements would enable. While TIF got its start in the 1950s, it’s coming into much greater prominence over the last two decades — such mechanisms are in place or have been discussed for projects such as riverfront development in Pittsburgh, a streetcar line in Arlington, Va., and a controversial pier in St. Petersburg, Fla. 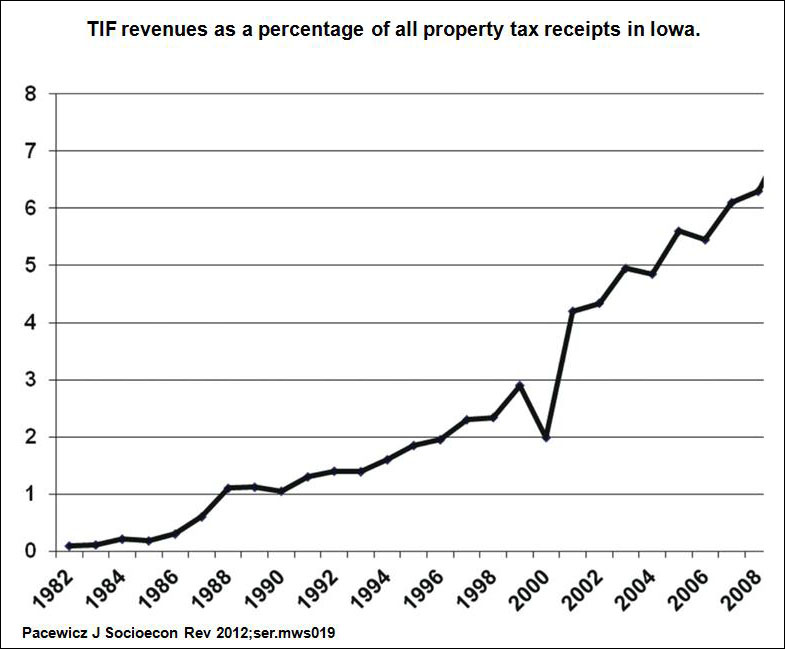 The use of TIF has also grown at a time when municipalities and private entities are increasingly working together to build infrastructure projects. While cities once commonly built hospitals, housing or roads by themselves, now public-private partnerships are often formed, with risk and reward being spread between the municipal and private parties. Projects can be as small as a few units of public housing to billions of dollars of transit, education and park improvements.

A 2011 paper by the Federal Reserve Bank of Kansas City and the University of Michigan looked for patterns in the use of TIF and other tax-based business incentives. The authors found that governments representing poorer communities are more likely to offer business tax incentives; there was also a correlation found between the rate at which government officials are convicted of federal corruption and the probability that a community will offer direct tax reductions rather than tax increment financing.

A 2013 Brown University study published in Socio-Economic Review, “Tax Increment Financing, Economic Development Professionals and the Financialization of Urban Politics,” explores the funding method’s origins, use and implications. The author, Josh Pacewicz, lays out the history of TIF — it was originally a funding method of last resort for “blighted” neighborhoods — and looks at how it has evolved. He also examines the use of such financing in two Rust Belt cities in Iowa (anonymized as “River City” and “Prairieville” in the study) to better understand how it can influence municipal politics.

“Traditionally, cities have issued two types of bonds: general obligation and revenue bonds,” the author writes. “General obligation bonds are backed by a city’s property tax base and, because a city is legally obliged to repay them, are counted by rating agencies as debt. In contrast, revenue bonds are not backed by a city’s property tax base and therefore do not impact a city’s credit rating.” Because TIF-backed securities are based on future revenue, they receive more favorable ratings from credit agencies and weigh less heavily on cities. This fiscal advantage is just one of the factors that has encouraged their use.

“The special status of development professionals in urban politics has co-evolved with a set of professional incentives that do not align with the city’s long-term fiscal outlook,” the author concludes. “First, they have an incentive to fund large development initiatives, which can allow them to move to a more prestigious position in another city before the long-term fiscal consequences materialize. Second, they have come to identify their professional identity with the capacity to creatively solve any problem, and this gives them an incentive to create ever-more elaborate, and generous, financing schemes with TIF.”

Releated research: A 2013 report from the Lincoln Institute of Land Policy, “Regenerating America’s Legacy Cities,” examines the challenges and opportunities 18 U.S. metropolitan areas facing manufacturing decline and population loss. The authors, Alan Mallach and Lavea Brachman, advocate step-by-step “strategic incrementalism” as a path to economic development, rather than the silver-bullet approach of signature architecture, a sports stadium or other megaprojects. Also of interest is “Economic Distress and Resurgence in U.S. Central Cities: Concepts, Causes and Policy Levers,” a literature review by the Federal Reserve Bank of Boston on U.S. central city growth and distress from 1950 to 2000.