The “American dream” may or may not be a single-family home in the suburbs, but the American reality is looking more and more like a multifamily rental property.

The Joint Center for Housing Studies of Harvard University (JCHS) publishes its “State of the Nation’s Housing” reports annually, and the 2015 edition reveals that housing in the United States continues to evolve in the wake of the housing bust, the slow economic recovery, and the demographic changes in the country’s population.

Overall, the report found that the housing recovery has stalled somewhat, with homeownership rates continuing to drop. Single-family construction is up slightly, but remains at historically low levels. By contrast, rental markets have grown substantially, and the construction of multifamily units has risen. Despite this, the demand for rental properties continues to outpace supply, leading to rising rents and greater burdens on those with the lowest incomes.

The report offers considerable levels of detail on those who own and rent, their ages and incomes, and the continuing evolution of rents, sales and construction in the United States. The JCHS has also made tables with more detailed figures available in Excel format and created an online data explorer.

The study’s key findings on homeownership include: 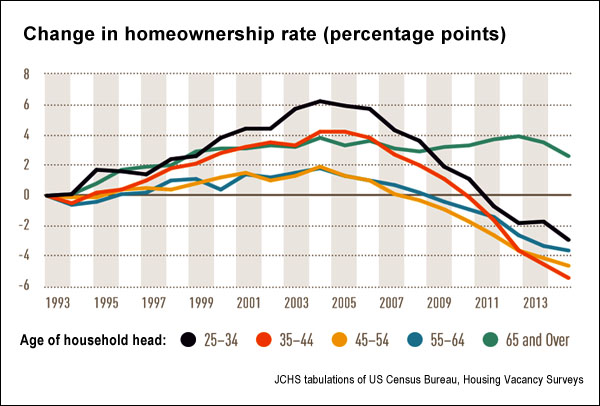 The authors find that the U.S. housing market is continuing to recover, but continued employment and income growth is central to that trend. Also essential is an increase in the supply of affordable housing, something that will require a “firm recommitment,” the report’s authors note, on the part of the federal government, states and municipalities.

Related research: A 2013 report from the Joint Center for Housing Studies of Harvard University, “America’s Rental Housing: Evolving Markets and Needs,” examines the demographics of those who rent, the housing stock and its condition, construction trends and public-policy challenges now and in the future. The authors note that, while renting can have many advantages over buying, the surge in demand, rising rents, and falling incomes have caused an increasing number of households to pay a crushing share of their income for housing.

The state of the nation’s housing in 2015: Homeownership down, rentals on the rise