From the moment the baby-boom generation took its first steps in 1946, its members have had an enormous impact on the United States. They powered the suburbanization of America in the 1950s, youth rebellion in the 1960s and the “Me Decade” of the 1970s. And now as they approach retirement, their sheer numbers will continue to drive societal change.

A May 2014 report from the Census Bureau shows that by 2050 the number of U.S. residents over 65 will nearly double compared to 2012 levels — 83.7 million versus 43.1 million. Because of improvements in health care, declines in smoking rates and other factors, retirees’ life expectancy is increasing as well: In 1972, someone aged 65 would on average live another 15 years; by 2010, the figure rose to 19 years.

Those extra years don’t come without costs: Retirees continue to draw Social Security and receive medical benefits, even as the proportion of U.S. residents working falls. The Social Security and Medicare Trustees have reported that Social Security costs will exceed income starting in 2021, and assets will be potentially exhausted in 2033. The Disability Insurance trust fund is in significantly worse shape: It will run out of assets by 2016. The date of asset exhaustion for the Medicare Hospitalization Insurance trust fund is 2024. State and local governments feel the pinch as well, as pensions promised during economic flush times often prove difficult to honor as costs rise and payrolls shrink. 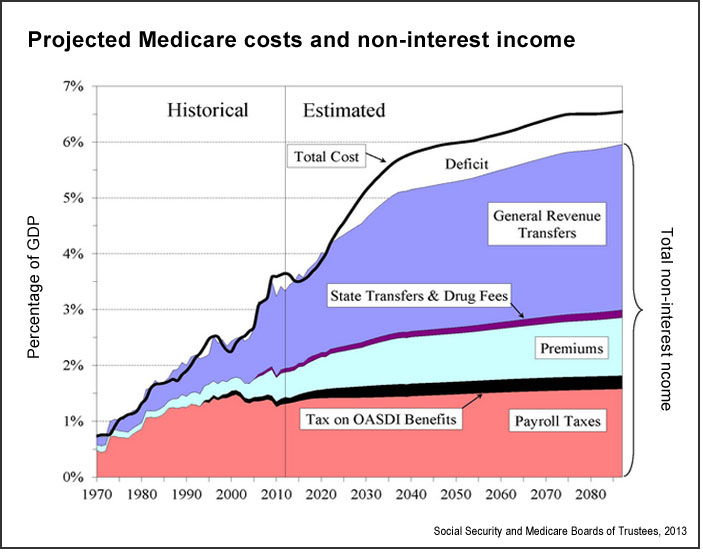 A 2014 study published in the Annual Review of Political Science, “State and Local Government Finance: The New Fiscal Ice Age,” looks at the broader impacts of the aging of the country’s population. The researchers — D. Roderick Kiewiet of the California Institute of Technology and Mathew D. McCubbins of Duke University — review academic literature and look at the impact of the Great Recession and demographic shifts on state and local finance. They note that as Medicaid and retirement costs increase, governments will have “less to spend on transportation, parks and recreation, education, public safety, and all the other services.”

The researchers emphasize that the ongoing changes are not the result of a crisis — a brief episode that eventually passes — but the beginnings of an enduring change: “The United States is in the throes of a long-term shift from the favorable demographic and economic conditions of the past to the far less favorable conditions of the future…. The fiscal [situation] confronting state and local governments will not improve during the lifetime of anyone reading this article. Indeed, in most places, fiscal conditions will become increasingly harsh.”

Related research: A December 2013 Federal Reserve working paper, “Walking a Tightrope: Are U.S. State and Local Governments on a Fiscally Sustainable Path?” The authors, Bo Zhao of the Federal Reserve Bank of Boston and David Coyne of U.C. San Diego, measure the “trend gap” between actuarially required contributions (ARCs) to pension and other post-employment benefits (OPEB). “The nationwide per-capita trend gap without pension or OPEB ARCs was already above zero during most of the 2000s. The full trend gap … reached over $1,000 per capita in 2010.” Without pension liabilities, the gap ranged between $700 and $1,000 per capita.

by Leighton Walter Kille, The Journalist's Resource
May 14, 2014