Since the end of the Cold War and the rise of global communications networks, there has been an ongoing debate about the “flattening” of world markets and cultures and the degree to which integration among nations may or may not accelerate.

The debate about the degree of connected-ness among humans and cultures has a long history of research that predates the Internet. Stanley Milgram’s “small world,” or “six degrees of separation,” study relied on an experiment with postcards in the 1960s. In 2003, a team of scholars at Columbia University, Peter Sheridan Dodds, Roby Muhamad and Duncan J. Watts, roughly confirmed Milgram‘s six-degrees hypothesis using email-related data.  One of the most heavily cited recent attempts to test this idea empirically was carried out by computer scientist Jure Leskovec, then of Carnegie Mellon, and artificial-intelligence expert Eric Horvitz of Microsoft Research. The two studied 30 billion conversations among 240 million people worldwide who were using Microsoft’s instant-messaging platform and again came to similar conclusions about the average “path length” — 6.6 degrees of separation — between individuals globally. Meanwhile, a 2012 paper based on Facebook data suggested only four degrees of separation between users of that platform.

The topic also has a wider political dimension. When Samuel Huntington published his controversial essay “The Clash of Civilizations?” in 1993, the Cold War had just come to an end and Francis Fukuyama had proclaimed the victory of liberal democracy. Against the backdrop of this optimism, Huntington in his influential essay predicted conflicts emerging from cultural divisions in the world, and he posited seven or eight “civilizations” around the globe that would remain largely distinct from one another: Western, Confucian, Japanese, Islamic, Hindu, Slavic-Orthodox, Latin American and African. His argument, which has faced decades of criticism, even from nominal supporters, was that the world of the future would be defined not by ideological or economic fault lines but by culture and civilization and that global politics, too, would be defined by conflicts provoked by these divisions.

A 2015 study published in PLoS One, “The Mesh of Civilizations in the Global Network of Digital Communication,” joins these ongoing debates by analyzing hundreds of millions of Yahoo email and Twitter messages to examine the “density” of social ties between countries, or the number of people exchanging messages with one another. The researchers — Bogdan State from Stanford University, Patrick Park and Michael Macy from Cornell University and Ingmar Weber from the Qatar Computing Research Institute — map the global alignment of interpersonal relationships, and then compare their findings with Huntington’s thesis that the great division among human beings after the Cold War is defined by culture.

After the authors color-coded countries according to their affiliation to one of Huntington’s eight civilizations, they clustered the relative density of ties between users in each country in a map. They “correct for Internet access and market penetration” of the given communications mediums. While the evidence in some ways confirms Huntington’s observations, the authors are clear that the data do not necessarily support heightened conflict. 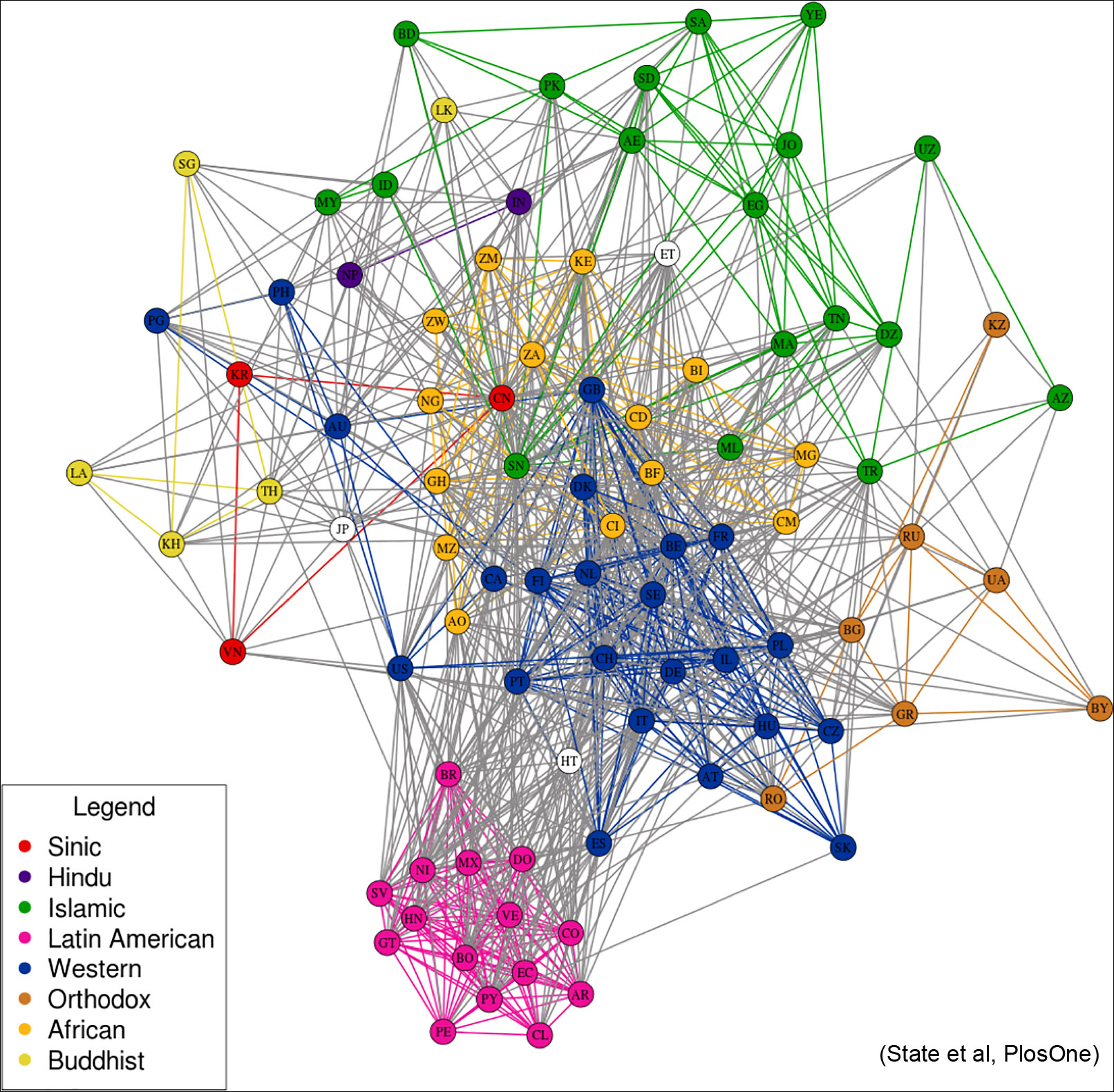 The authors caution that while Huntington’s thesis seems to be confirmed by their findings, “this does not rule out alternative theories about international alignments whose predictions might also fit the observed patterns.” Additionally, they note that their findings provide evidence for social interaction but “there is no reason to assume that conflict is inevitable between countries with lower density of social interaction. For example, research on the impact of social media in the Arab Spring suggests that digital communications may facilitate divisions within civilizations as much or more than divisions between.” Accordingly the authors suggest that their findings show “mesh” of civilizations rather than highlight a “clash.” In any case, they provide some antidote to the “borderless portrayal of cyberspace.”

Alice Fleerackers had already been looking at how online news stories portray uncertainty around science when the pandemic hit. She decided to turn her attention to the use of preprints.

A lapsed federal moratorium protecting certain renters from eviction had kept millions of Americans with roofs over their heads during the coronavirus recession. These eight papers provide context on the state of U.S. evictions.

This tip sheet, from two journalists who grew up poor and still have strong ties to the working class, is meant to help newsrooms do a better job covering poverty and people with limited resources.

Small worlds and the clash of civilizations: New data on the dimensions of a globalized world