Nearly 60 years after Brown vs. Board of Education was decided by the U.S. Supreme Court — and a half-century after the March on Washington — the issue of racial segregation in public schools has become even more complicated for concerned citizens, parents, students and policymakers. Legal changes and economic realities explain part of this, and shifting demographics are an increasingly important driver.

There are mounting worries on the part of many observers that, although the country is indisputably becoming more diverse at the general level, complex patterns are unfolding that are producing more racially segregated pockets across America. Some news stories have begun to look at these dynamics. For example, a May 2014 series, “Segregation Now,” by Nikole Hannah-Jones of the investigative news outlet ProPublica, provides a deep examination of how the early gains of integration have been eroded in Tuscoloosa, Ala., which in 2000 was released from federal court oversight of its school system. ProPublica found that “from 1993 to 2011, the number of black students in schools where 90 percent or more of the student population are minorities rose from 2.3 million to over 2.9 million.”

Still, the degree of resegregation depends on the types of neighborhoods and schools studied, as recent research literature suggests.

At the macro level, the 2013 paper “Integration or Fragmentation? Racial Diversity and the American Future,” published in the journal Demography by Cornell University’s Daniel T. Lichter, provides a comprehensive view of trends that constitute what is being termed the nation’s Third Demographic Transition. “As racial and ethnic diversity unfolds from the bottom up — beginning with children — America may be challenged as never before,” Lichter writes, noting that all future population growth will come from non-white groups. “Racial inclusion, which has been reflected in past declines in racial residential segregation and racial homophily, is hardly guaranteed. Indeed, past progress may be lost.”

Taking the long view, many American communities are less racially segregated, as Edward Glaeser of Harvard and Jacob Vigdor of Duke find in their 2012 paper “The End of the Segregated Century: Racial Separation in America’s Neighborhoods, 1890-2010.” However, a 2012 report from the Pew Research Center suggests neighborhoods are increasingly segregated by income, as inequality has risen.

In any case, residential segregation obviously continues to be a decisive factor in terms of determining levels of school segregation.

Even long after the doctrine of “separate but equal” has been discredited, research continues to show why these issues matter. At stake are huge differences in educational outcomes and life chances for students of color. For example, a 2013 study published in American Educational Research Journal, “High School Socioeconomic Segregation and Student Attainment,” finds that peer influence is an important and underappreciated factor in motivating students to achieve. The author, Gregory J. Palardy of the University of California, Riverside, concludes that “even after controlling for an array of student background characteristics and school inputs, students who attended high-SEC [socioeconomic composition] schools were 68% more likely to enroll at a four-year college than students from low SEC-schools. Because educational attainment is associated with several important life outcomes — access to careers, income, and even health — this finding suggests that attending a low-SEC high school may have lifelong negative consequences.”

Among the most striking papers to explore this theme of potential “lost” progress is the 2012 paper “Brown Fades: The End of Court-Ordered School Desegregation and the Resegregation of American Public Schools,” published in the Journal of Policy Analysis and Management. The researchers, Sean F. Reardon, Elena Tej Grewal, Demetra Kalogrides and Erica Greenberg — all at Stanford University — look at 200 medium and large school districts that were legally released from court-ordered desegregation plans. They note the following general trends: “Of the 483 districts enrolling at least 2,000 students and still under order in 1990, 215 (45%) were released before 2009 and 268 remained under court order”; further, “the rate at which districts have been released has increased over time: more than twice as many districts were released in the 2000s as in the 1990s.” Their data analysis yields the following conclusions: 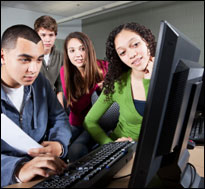 The findings of that paper — and the concerns over “resegregation” — are amplified when one considers other statistical context. A 2012 report from UCLA’s Civil Rights Project, “E Pluribus…Separation: Deepening Double Segregation for More Students,” notes that “nationwide, the typical black student is now in a school where almost two out of every three classmates (64%) are low-income, nearly double the level in schools of the typical white or Asian student (37% and 39%, respectively).” The report, by Gary Orfield, John Kucsera and Genevieve Siegel-Hawley, frames the evidence bluntly: “Fully 15% of black students, and 14% of Latino students, attend ‘apartheid schools’ across the nation, where whites make up 0 to 1% of the enrollment.”

In an article titled “Segregation 2.0: The New Generation of School Segregation in the 21st Century,” Dana N. Thompson Dorsey of the University of North Carolina at Chapel Hill notes the following:

According to the National Center for Education Statistics (2012), during the 1968-1969 school year, which was just 14 years after Brown v. Board of Education of Topeka (1954) and the beginning of the U.S. Department of Education’s Office of Civil Rights enforcement of desegregation orders across the country, approximately 77% of Black students and 55% of Latino students attended public schools that were comprised of 50% to 100% racial minorities. In 2009-2010, more than 55 years after the Brown decision, the country’s public schools reflected an overall school segregation with about 74% of Black students and 80% of Latino students attending schools that were 50% to 100% minority and, more specifically, more than 40% of Black and Latino students were attending schools that were 90% to 100% minority (NCES, 2012).

Dorsey’s paper appears in a special September 2013 issue of the journal Education and Urban Society, which is dedicated to exploring school resegregation issues and features case studies in places such as North Carolina and Texas.

A 2013 paper in The Quarterly Journal of Economics, “School Segregation, Educational Attainment and Crime: Evidence from the End of Busing in Charlotte-Mecklenburg,” finds that halting this historical remedy in one North Carolina community “widened racial inequality.” In that study, Stephen B. Billings of the University of North Carolina-Charlotte, David J. Deming of Harvard Graduate School of Education and Jonah Rockoff of the Columbia Graduate School of Business present evidence that suggests “explicit efforts may be necessary if policymakers wish to prevent a widening of racial and economic inequality in the wake of increases in school segregation.”

Reintegration and the suburbs

There are other ways of slicing and selecting data, of course, and this can lead to different interpretations and story lines. Much of the prior research literature in the area of school segregation agrees that, beginning in the 1990s, there was a reversal of national trends toward integration. However, a 2013 study published in the American Educational Research Journal, “From Resegregation to Reintegration: Trends in the Racial/Ethnic Segregation of Metropolitan Public Schools, 1993–2009,” speaks to wider trends among all urban districts and finds a third general pattern emerging in the 2000s — that of “modest reintegration.” Researchers Meredith P. Richards of the University of Pennsylvania and Kori J. Straub of the University of Texas at Austin analyze government data relating to some 350 urban districts — many of which were not under desegregation orders — across the United States. Their findings include:

Different regions, such as the South, continue to see divergent — many would say troubling — dynamics playing out. While U.S. suburbs are becoming more diverse, as minority groups such as Hispanics move into new areas and more poverty shifts outside of city centers, a 2012 report from the University of Minnesota finds that many suburbs remain racially segregated. New research continues to look at the experiences of racial minorities who are bussed into suburban schools.

Another 2013 study, “Demography and Educational Politics in the Suburban Marketplace,” published in the Peabody Journal of Education (from Vanderbilt University), analyzes the results of “in-depth fieldwork in seven multiracial suburban districts.” The researchers, Erica Frankenberg and Stephen Kotok, of Pennsylvania State University, note that the districts they analyze are not necessarily representative because a “possibility of creating equitable, diverse schools remains, which is no longer possible in many urban districts due to the exit of the White and middle class from such schools.” Still, the study looks at how diversity plays a role in municipal schools policy; it examines how inequality can arise in districts where more advantaged residents exert pressure and district leaders risk seeing upper-income residents “exit” if they are not accommodated. (A 2012 book The Resegregation of Suburban Schools, by Frankenberg and Orfield, provides even more comprehensive perspective.)