In April 2014 the Bureau of Labor Statistics (BLS) announced that the number of U.S. private-sector jobs had finally returned to their 2008 peak — six long years ago, and after an achingly slow, four-year recovery. A 2013 report from the Congressional Research Service (CRS) indicated that in October 2006 unemployment was only 4.4%, but by 2009 had hit 10%. It has since dropped to 6.7%, but openings can remain stubbornly hard to find. Many groups have been hard hit, from veterans to recent college graduates, and for the long-term unemployed, job searches can stretch on endlessly.

The U.S. economy is expected to add approximately 200,000 jobs a year, but those added aren’t necessarily the same as the ones that were lost six years ago. Ongoing technological and economic change, including computerization and offshoring, have led to a significant recomposition of the U.S. labor market. A 2013 study from Duke and the University of British Columbia, found that during recessions, middle-income jobs are hollowed out at rapid rates.

A 2014 analysis of BLS data by the National Employment Law Project (NELP), “The Low-Wage Recovery: Industry Employment and Wages Four Years into the Recovery,” takes a close look at the types of jobs that were lost during the recession and those that have been added since the recovery began. Source data came from the BLS’s Current Employment Statistics (CES) and Occupational Employment Statistics (OES) surveys. Wage data came from the OES, which provides median estimates rather than averages, which can be distorted by higher-wage occupations within certain industries. 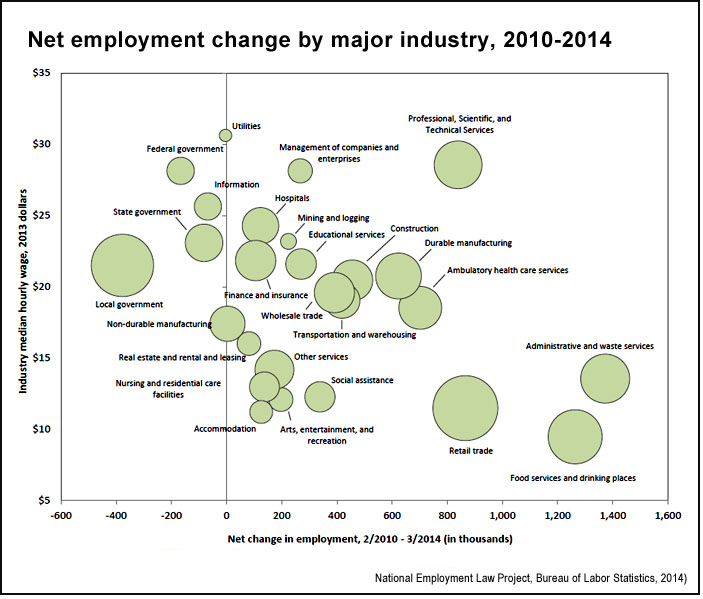 The study’s author, Michael Evangelist, in an interview with the New York Times, said: “Fast food is driving the bulk of the job growth at the low end — the job gains there are absolutely phenomenal. If this is the reality — if these jobs are here to stay and are going to be making up a considerable part of the economy — the question is, how do we make them better?”

Related research: A 2014 review by the Pew Research Center also looks into the Bureau of Labor Statistics data to examine the role of geography in long-term unemployment. They cite research that supports the existence of a “spatial mismatch” between job seekers and jobs: “Living near where the jobs are significantly reduces the amount of time it takes unemployed jobseekers to find work. The research found that to be especially true for blacks, women and older workers.” Also of interest is a 2014 study for the National Bureau of Economic Research (NBER), “Declining Migration within the U.S.: The Role of the Labor Market.” It explores why internal migration in the United States has decreased steadily since the 1980s. The scholars, at the Federal Reserve and University of Notre Dame, find that a significant driver of the trend is the “decrease in the net benefit to changing employers” — new jobs offer lower wages or other benefits than old ones did, so moving is less attractive.

The low-wage recovery: Industries and jobs after the Great Recession

by Leighton Walter Kille, The Journalist's Resource
May 1, 2014