In the lingering aftermath of the Great Recession, recent college graduates are having a tough time of it. As state aid for education has fallen, student loans have risen, leading to crippling levels of debt — the average in recent years has been about $23,300, though that figure may have climbed to more than $29,000. Limited options after graduation in a tight job market only make this situation more difficult.

A 2012 Johns Hopkins survey of 450 recent graduates found that only 50% were employed full time, while 26% were working part time, 6% were unemployed and 6% underemployed. A full 60% of those who were working received an hourly wage, averaging just $10.23 per hour. Although the unemployment rate for those with a bachelor’s degree or higher declined in 2013, many recent college graduates are still struggling to find their desired jobs.

A 2014 study by the Federal Reserve Bank of New York, “Are Recent College Graduates Finding Good Jobs?” puts the struggles of recent college graduates in historical context. Authors Jaison R. Abel, Richard Deitz, and Yaqin Su — all economists with the Regional Analysis Function of the Federal Reserve Bank of New York’s Research and Statistics Group — use data from the U.S. Census Bureau, the U.S. Bureau of Labor Statistics, and the U.S. Department of Labor’s Occupational Information Network to compare the employment status of new college graduates with those over two decades. 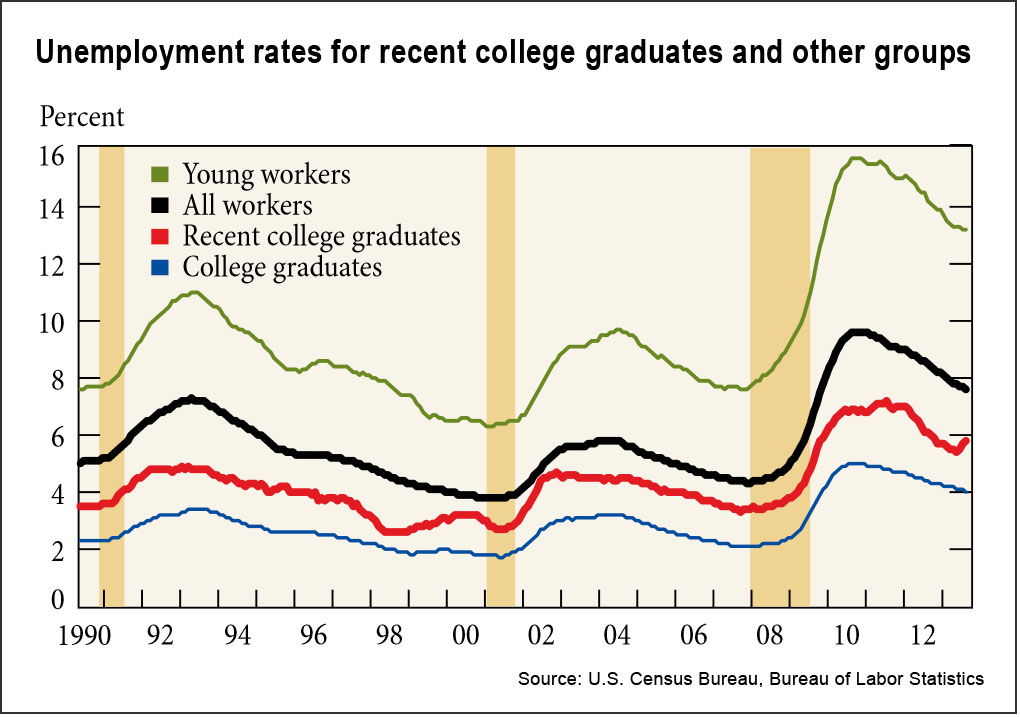 “Our analysis demonstrates that new college graduates typically take some time to transition into the labor market and find jobs that utilize their education,” the researchers state. “In fact, during both good and bad economic times, relatively high rates of unemployment and underemployment are not uncommon among college graduates just beginning their careers, and those rates can be expected to drop considerably by the time the graduates reach their late 20s.” They note that their findings should not be considered a deterrent against pursuing higher education.

Related research: A 2013 study from the Pew Center on the States, “How Much Protection Does a College Degree Afford?” examines whether having a degree can give workers more protection against being laid off as well as greater opportunities to move ahead. Among other findings, it determined that while the recession negatively affected most 21- to 24-year-olds, the drop in employment and wages was much more severe for those with less education: Before the downturn, 55% of young adults with a high school degree were employed, compared to 64% with an associate degree and 69% with a bachelor’s degree. After the recession, the employment dropped to 39% for those with HS degrees (down 16%), to 53% for associate degrees (down 11%) and to 62% for bachelors degrees (down only 7%).