Nations have deeply subjective ideas about each another, and the images they project to the world are filtered through complex cultural, economic, political and security perspectives. Perceptions of current presidents and prime ministers heavily influence how the global public evaluates countries, as do the way leaders’ images are refracted through news media. Nowhere are these dynamics more evident than with the differing views of the world’s two leading economic powers, the United States and China, as suggested by Pew Research Center data.

A December 2014 working paper from the Harvard Kennedy School, “Reflections on a Survey of Global Perceptions of International Leaders and World Powers,” looks at how the world’s major leaders are seen by domestic audiences and abroad. The researcher, Anthony Saich of Harvard’s Ash Center for Democratic Governance and Innovation, sought to better understand the relationship between political institutions and citizen awareness of political leaders. The survey — which involved 26,000 respondents across five continents — asked citizens from 30 countries for their views on 10 influential national leaders with power on a global scale.

Saich notes that the data reveal two key trends: First, responses are heavily influenced by geopolitics and existing conflicts and contacts between countries; second, there was a correlation between the nature of the political system and citizens’ opinions of their own nation’s leader. Multi-party systems or two-party systems are generally more critical of their leaders compared to systems where politics is less contested.

The study’s other findings include: 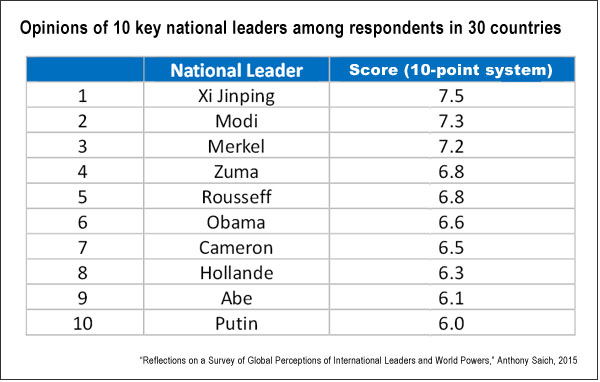 India’s Narendra Modi saw high evaluations domestically, and his standing defies the general rule that leaders have lower evaluations in societies with a large number of political parties and political openness. However, Saich cautions that the survey was undertaken just after Modi had been elected.

Related research: A well-known and often-criticized tendency of news media and political actors is to “personalize” complex issues, reducing them to conflicts between leaders rather than highlighting the tensions between systems or institutions, or larger historical forces. For more on this phenomenon, see “Mediatization and Personalization of Politics in Italy and France: The Cases of Berlusconi and Sarkozy,” published in the International Journal of Press/Politics; “The Personalization of Politics in Western Democracies: Causes and Consequences on Leader–follower Relationships,” published in the Leadership Quarterly; and “Personalization of National Election Campaigns,” in Party Politics.