According to the U.S. Bureau of Labor Statistics, in May 2012 nearly 7 million Americans worked in the fast-food industry, including 3.4 million counter workers, 2.9 million in preparation and serving, and more than 500,000 cooks. Their average pre-tax yearly income comes to about $18,770, which is just over $9 an hour. For a family of three, that’s well below the federal poverty line of $19,530. For the 3.6 million Americans who earn the $7.25 federal minimum wage or less, their maximum before-tax income of $15,080 puts them below the poverty line for a two-person household.

As the cost of living continues to rise, including housing, food, and transportation, millions of low-wage workers end up having to use taxpayer-funded assistance programs to get by, including Medicaid, the Earned Income Tax Credit (EITC) and food stamps, now known as the Supplemental Nutrition Assistance Program (SNAP). Large corporations, including fast-food leader McDonald’s, have been accused of encouraging workers to sign up for SNAP, allowing them to keep wages low and profits up (the firm had net earnings of $1.52 billion in the second quarter of 2013). Many other fast-food giants, including Burger King, KFC, Dunkin’ Donuts and Wendy’s, have been found to have large numbers of employees who have to use federal and state programs for basic necessities.

A 2013 study published by the U.C. Berkeley Labor Center, “Fast Food, Poverty Wages: The Public Cost of Low-wage Jobs in the Fast-Food Industry,” looks at the use of federal and state programs by families of workers in major restaurant chains. The authors — Sylvia A. Allegretto, Marc Doussard, Ken Jacobs, Dan Thompson and Jeremy Thompson — analyzed the total average annual public-benefit expenditures on workers from 2007 to 2011. The study was conducted by U.C. Berkeley and the University of Illinois at Urbana-Champaign, with funding by groups campaigning for higher wages for fast-food workers. For the purposes of the analysis the research focused on “core, front-line fast-food workers, defined as nonmanagerial workers who work at least 11 hours per week for 27 or more weeks per year.” 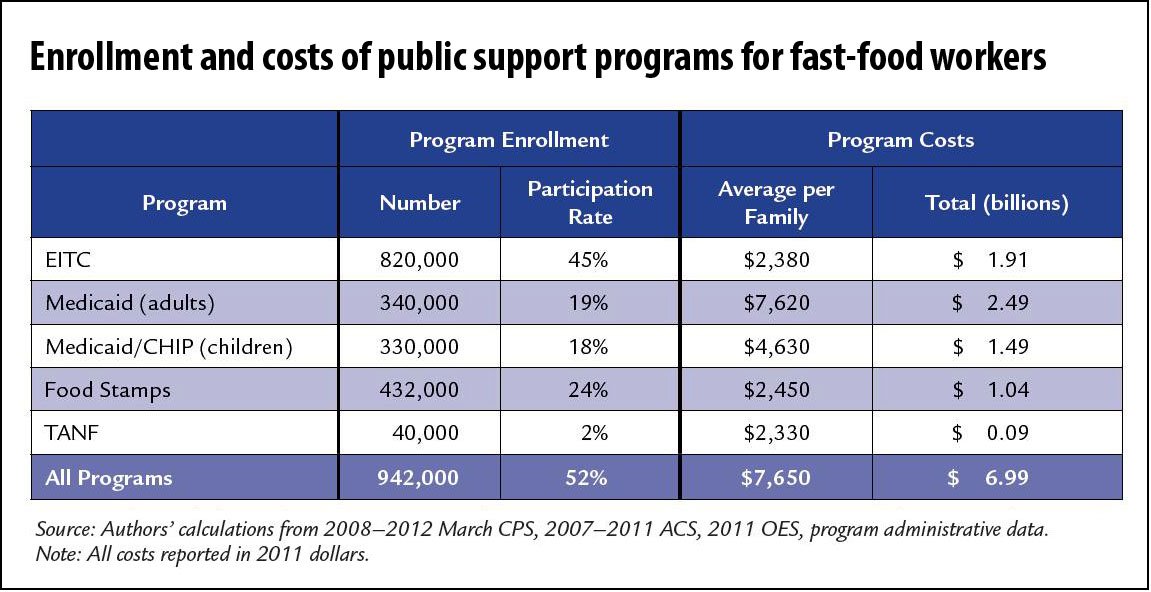 “The data we have assembled indicate working families would directly benefit from improved pay and hours in the fast-food industry,” the authors state. “We show that fast-food workers live in poorer families compared to other workers, they are primarily adults and they require public assistance at a higher rate than the workforce as a whole.” They note that dominant low-wage industries — fast food, retail, and hospitality — don’t have to compete with offshore producers with lower labor and production costs, making employees’ wage levels more amenable to public-policy solutions.

In play already is the Affordable Care Act (ACA), which takes effect in 2014. Its health-care exchanges began enrolling members in October 2013, and the ACA requires employers with more than 50 employees to provide health insurance. McDonald’s has 1.8 million employees worldwide and more than 400,000 people work in one of their restaurants in the United States, the vast majority of whom do not have insurance now.

A related 2009 study by Johns Hopkins University and the University of Maryland, “The Economic Burdens of Health Inequalities in the United States,” found that health inequalities and premature deaths because of poor care impose substantial costs — between 2003 and 2006 alone, $1.24 trillion. Minorities suffered disproportionately: 31% of direct medical care expenditures for African Americans ($135.9 billion), Asians ($11.4 billion) and Hispanics ($82 billion) were excess costs due to health inequalities, the study found.