A 2014 Pew Research Center poll on international attitudes toward the United States found that those of African nations varied significantly: The most negative views were held by Egyptians, 85% of whom were critical of the United States. At the other end of the scale, 80% of Kenyans surveyed had positive views, as did 77% of Ghanaians and 75% Tanzanians. This is a far cry from 2006, when the New York Times reported that a “wave of anti-Americanism” was sweeping the continent, but also a drop from the “Obama bounce” of 2009, after the president’s historic visit to Ghana.

African attitudes toward the United States also depend on the context: America provides billions of dollars in development assistance to the continent through USAID and other organizations, even as U.S. firms are heavily involved in resource extraction, from water resources to petroleum. Further, the United States is sparring with China for influence in Africa.

A 2014 study published in the International Journal of Public Opinion Research, “Pro- and Anti-Americanism in Sub-Saharan Africa,” looks at sentiments in the region toward the U.S. and why, overall, they tend to be more positive than in many other parts of the world. The researchers — Devra C. Moehler, Felicity Duncan and Laura R. Silver of the Annenberg School for Communication at the University of Pennsylvania — sought to better understand the individual-level factors responsible for pro-American attitudes in Africa and why they are higher there than elsewhere in other developing world.

The data come from the 2007 Pew Global Attitudes Project survey, and four potential factors were explored: Africans’ degree of political sophistication; personal contacts with the United States; support for the country’s international engagement; and admiration for the United States’ domestic model. Data from all 29 developing countries surveyed by Pew in 2007 were included. 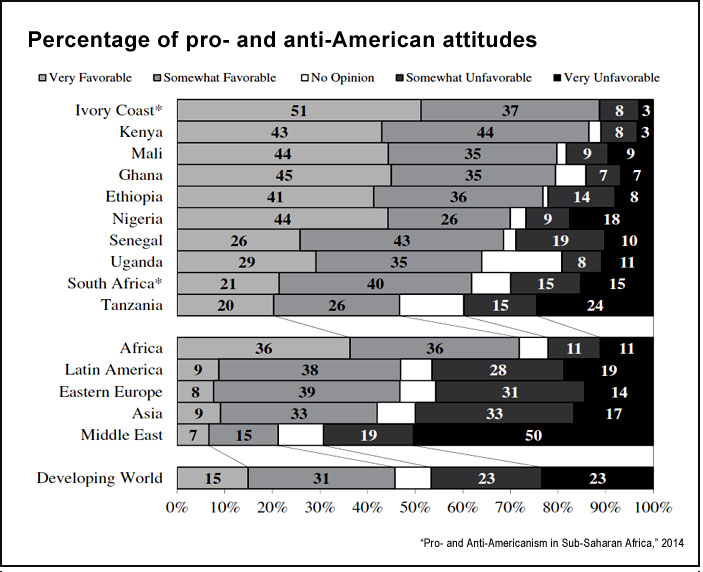 The authors find that the U.S. is well placed to capitalize on the pro-American sentiment in sub-Saharan Africa, but they caution that China’s growing influence, greater access to foreign-produced news and “political sophistication” could reduce pro-American sentiment. The authors note that the U.S. can “sustain and enhance” the positive feelings Africans have by “emphasizing active policies in Africa with respect to increasing trade, promoting free markets and foreign investment, undertaking visible aid efforts and fostering personal contacts.”

Related research: A July 2013 Pew report looks at global views of the United States and China, while a 2014 study in the Journal of Contemporary China, “Chinese State-owned Enterprises in Africa: Ambassadors or Freebooters?,” looks at behavior of Chinese state-owned companies in Africa and the perception countries have of their work.

Pro- and anti-Americanism in sub-Saharan Africa