Technology companies are no strangers to fighting it out in the marketplace, but the courts are increasingly a favored battleground of firms large and small. Apple and Samsung are currently suing and countersuing over smartphone patents, while Boston Scientific and Johnson & Johnson fought over coronary stents for years. Tiny VirnetX took on Apple, won big, then lost big.

The sheer number of patents that companies file to cover sophisticated devices — the iPhone is said to involve more than 200 — adds to the problem, as has the U.S. Patent Office’s willingness to grant ownership of concepts rather than tangible creations — Amazon’s notorious “one-click” patent, for example. This has opened the door to more suits, not only from the Apples and Samsungs of the world, but also what are called patent-assertion entities (PAE), nonpracticing entities (NPE) or patent monetization entities (PME) — often derided as “patent trolls,” an intentionally derogatory term invented by Intel lawyers in 1997.

Lawsuits over intellectual property (IP) have a rich history, of course, but according to a 2013 report from the U.S. Government Accountability Office (GAO), the number of cases has spiked in recent years — up 31% from 2010 to 2011 alone. The GAO suggests three factors in the rise: unclear and overly broad patents; the potential for immense damage awards; and the “increasing recognition that patents are a valuable asset.” 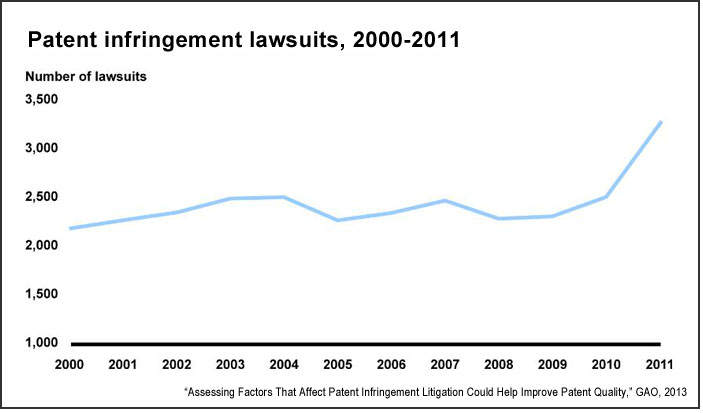 In its report, the GAO found that between 2007 and 2011, operating companies initiated approximately 68% of all suits, while nonpracticing entities were responsible for 19%, individuals for 8%, and research firms and universities for fewer than 3%. The percentage of suits filed by operators has been falling, however, dropping from 76% in 2007 to 51% in 2011, as those by NPEs rose. The increasing number of suits can be costly: A 2012 study by Boston University indicates that in 2011 alone, patent assertions imposed $29 billion in direct costs on defendants. “Although large firms accrued over half of direct costs, most of the defendants were small or medium-sized firms, indicating that NPEs are not just a problem for large firms,” the researchers write.

There’s a lot of nuance, however, and as with all legal matters, virtue is often in the eye of the beholder. A 2013 report by the Congressional Research Service provides good background on the debate, as does a 2013 overview by Thomas A. Hemphill of the School of Management at the University of Michigan, Flint.

Reforming the U.S. patent system while protecting innovation has long been a goal, and in 2011 President Obama signed the Leahy-Smith America Invents Act (AIA), which had broad bipartisan support. Among other changes, the act switches the United States from a “first to invent” to a “first inventor to file” system, and also limits the number of defendants in lawsuits. But the latter provision has had the unintended consequence of increasing the caseload. To address this and other concerns, Congress has in recent years considered several different legislative strategies, but remained stalemated, in part because of opposition from pharmaceutical and biotechnology companies.

A 2014 NBER paper, “Patent Trolls: Evidence from Targeted Firms” by Lauren Cohen of Harvard Business School, Scott Duke Kominers of Harvard University and Umit Gurun of University of Texas at Dallas, analyzes the behavior of nonpracticing entities. It also examines the characteristics of companies that are likely to be targeted, in addition to the effects of patent claims by NPEs on a firm’s innovation practices.

“The stakes of how to organize intellectual property disputes are massive,” the authors state. “If the United States becomes a less desirable place to innovate because NPEs are left unchecked, innovation and human capital and the returns to that innovation and human capital will likely flee overseas.” Based on their findings, they suggest that the “marginal policy response should be to more carefully limit the power of NPEs or, in the framework of our model, increase the cost of bringing suit against commercializers of innovative ideas.”

One of the most common ways reporters cover elections — with a focus on who’s in the lead and who’s behind instead of on policy issues — hurts the public and the news industry.