Like much of the U.S. tax code, the home mortgage interest deduction (MID) has a complex history. Introduced in 1913, its original purpose was to simplify businesses’ tax returns — almost all interest payments a century ago were business-related, so no distinction was needed between professional and personal costs. More than half of Americans rented at the time, and continued to do so until the creation of the Federal Housing Administration in 1934 and its subsequent mortgage-guarantee program. It was only when suburbanization took root in the 1950s that the MID came to be perceived as an essential part of enabling the “American dream” of home ownership, an association encouraged by presidents and partisans alike. Not bad for an “accidental deduction,” as it is described in a 2010 paper from U.C. Davis.

Much has changed since 1913, of course, in particular the tax code. All consumer interest was once deductible, but that went away with the 1986 Tax Reform Act, signed by President Ronald Reagan. Yet MID hangs on, in part thanks to fierce support by the National Association of Realtors and other industry groups. But in an age of high unemployment, falling tax receipts and increasing concerns about Social Security and Medicare, the mortgage-interest deduction has become very expensive: According to a 2013 report from the nonpartisan Center on Budget Priorities, the MID cuts into government revenue by roughly $70 billion a year, but “appears to do little to achieve the goal of expanding homeownership.”

Part of the problem is that the higher one’s tax bracket, the more benefit the deduction provides. And to even claim it, taxpayers must itemize their returns, yet few lower-income Americans do. As a consequence of these and other factors, more than 75% of the MID’s benefits go to households with incomes over $100,000, and often for second homes, according to the CBP. Given the sharp rise in income inequality in the United States, the desire to address the growing federal deficit, and other issues, Congress has shown a willingness to revisit what has been called the “third rail” of the U.S. tax code. In February 2014, Dave Camp, chairman of the House Ways and Means Committee, unveiled a plan that would have cut the mortgage limit in half, to $500,000. While the plan’s reception was chilly, some adjustment to the MID seems inevitable in the long term, particularly within a larger tax reform.

A 2014 report from the Congressional Research Service (CRS), “An Analysis of the Geographic Distribution of the Mortgage Interest Deduction,” looks at variations in the deduction’s use from state to state. The purpose of the report, authored by Mark P. Keightley, is to help Congress better understand the potential impact of any tax-reform plan. 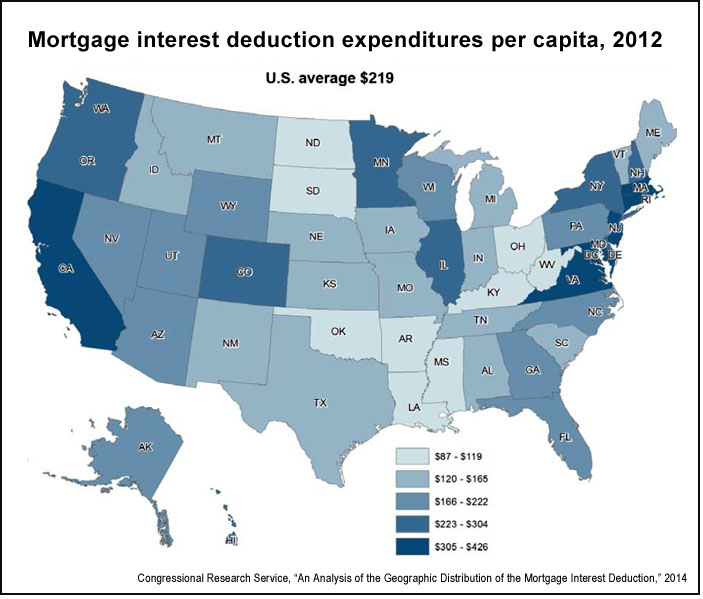 The Congressional Research Service Report looks at four policy options considered for the mortgage interest deduction. They are:

“It is important to note that any change to the mortgage interest deduction would likely require careful consideration of how to transition to the new policy so as to minimize disruptions to the housing market and overall economy,” the author writes. “Depending on its design, a policy modification could result in a more evenly distributed benefit to homeowners. The author cites research that suggests that if the deduction were phased out over 15 to 20 years, it would have no effect on demand or prices.

Related research: A 2013 study from the Peterson Institute for International Economics, “Does High Home-Ownership Impair the Labor Market?” found that increasing rates of home-ownership in a state were eventually followed by higher unemployment. The reasons: lower levels of labor mobility, longer commutes and reduced rates of businesses creation. Also of interest is a 2010 paper from the University of California, Davis, “The Accidental Deduction: A History and Critique of the Tax Subsidy for Mortgage Interest.” It found that the MID had undesirable effects such as “distorting the cost of owner-occupied housing relative to other investments, contributing to overinvestment in the asset class and misallocation of capital stock [and] artificially raising housing prices.”

The mortgage interest deduction: Its geographic distribution and policy implications