Monetary costs of dementia in the United States

Dementia is defined as a decline in cognitive functioning to the point where it significantly affects daily life; it is not a disease but instead a group of symptoms, such as memory loss and confusion. The most common form of dementia is Alzheimer’s disease, which accounts for 60-80% of cases. It is currently the sixth-leading cause of death in the United States, and 1 in every 3 seniors dies with the disease or some other form of dementia.

More than 5 million Americans suffer from Alzheimer’s, and the annual cost of the disease is $203 billion, as estimated by the Alzheimer’s Association. Further, this cost is expected to grow substantially over time — if no substantial medical advances are made — to an estimated $1.2 trillion in 2050. 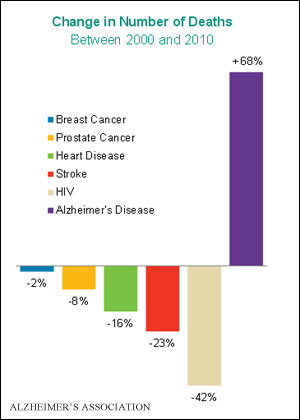 Despite the serious policy implications for the health care system — 14.7% of Americans over 70 suffer from dementia — it has been difficult to derive a complete cost picture of dementia, including Alzheimer’s. According to a 2013 study published in The New England Journal of Medicine, there are several reasons for this difficulty. First, individuals who are afflicted with dementia have a higher likelihood of having other diseases, such as heart disease, therefore making the cost from the dementia alone harder to disaggregate. Second, it is challenging to calculate the amount spent on home healthcare providers because this information is often self-reported. Finally, it is difficult to measure the cost of the hours of informal and unpaid care that individuals with dementia receive. Still, there have been several attempts to measure the full economic cost of dementia globally and make projections about its future cost.

The New England Journal of Medicine study, titled “Monetary Costs of Dementia in the United States” — the most comprehensive of its kind yet done by researchers — examines a sample of 856 individuals from the Health and Retirement Study, a national longitudinal study of adults over age 51, and performs diagnostic testing for dementia on these individuals in order to measure rate of prevalence of dementia. In addition, the researchers utilize Medicare claims data, and self-reported data on out-of-pocket spending and informal unpaid care, from each of the participants to estimate the economic cost to them, adjusting for other existing conditions and demographic characteristics. The researchers are from the RAND Corporation, the National Bureau of Economic Research, the Network for Studies on Pensions, Aging, and Retirement (Tilburg, the Netherlands), the University of Essex and the University of Michigan.