In the United States, urban centers such as Detroit, Pittsburgh and Cleveland suffered significant job losses in the 1970s and 1980s as their manufacturing bases declined. The phenomenon wasn’t restricted to the industrial north, however — mid-Atlantic cities such as Philadelphia and Baltimore also felt the effects, as did traditional towns across the United States. What they all had in common was declining population and disinvestment in their core areas, aggravated by state and federal policies that effectively encouraged suburbanization. With infrastructure crumbling, poverty growing and social tensions rising, the cycle accelerated.

The phenomenon is often seen as being restricted to the “rustbelt,” but research indicates that similar patterns can play out within cities of all sizes, locations and ages. A 2015 study published in Applied Geography offers an analytical framework for categorizing neighborhoods in different stages: suburban, stability, blue collar, struggling and new starts. The study suggests that the transition pathways can be highly variable within rapidly growing cities such as Charlotte, N.C., and Portland, Ore., as compared to neighborhoods in cities such as Buffalo and Chicago, which see more predictable “downgrading” trajectories.

To reverse such trends, many cities have been actively working to reinvest in affected areas, encouraging mixed-use developments, new transit systems, and more. Data from the U.S. Census indicate that the majority of U.S. population growth is now in central, urbanized areas — in 2010 they held 71.2% of residents, versus 68.3% in 2000. Revitalization brings its own challenges, however, including gentrification, in which long-time, lower-income residents are displaced by newer arrivals. Boston University’s Initiative on Cities surveyed mayors across the country in 2014 and found that leaders were divided when asked to evaluate whether “it is good for a neighborhood when it experiences rising property values, even if it means that some current residents might have to move out.”

While new jobs are essential for restarting growth, the benefits aren’t always equally distributed: A 2014 study in Urban Affairs Review on 10 cities whose economies once centered around heavy industry found that economic growth in central business districts led to more income inequality. In particular, the study found that shifting from a manufacturing-based economy to education and health services led to significant growth in core areas, but also an “erosion of jobs and workforce attachment in much of the rest of the city, reflecting the uncoupling of the city’s newly emerging economy from the city’s residents.” 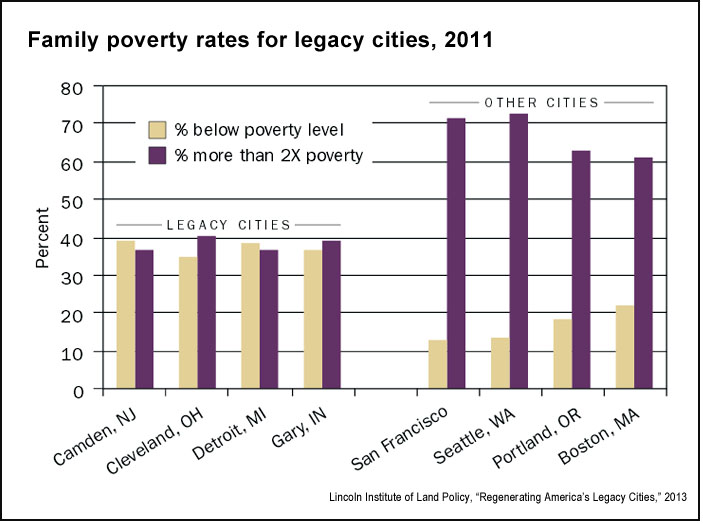 Such one-shot approaches — moving from one kind of economy to another — also don’t take into account the specific strengths and needs of a particular city, nor larger questions of equality, poverty and social justice. Successful, urban economic development requires careful integration of strategies across all levels, and inclusive policies on a wide array of cultural, economic and infrastructure developments and activities.

A range of recent research looks at these questions. An extensive 2013 report from the Lincoln Institute of Land Policy, “Regenerating America’s Legacy Cities,” provides a deep look at 18 “legacy cities” — defined as former industrial centers that experienced decline during the second half of the 20th century. The study focuses on a sample of 18 with a population of 50,000 or more that have experienced at least 20% population loss in recent decades. The researchers, Alan Mallach and Lavea Brachman, look at 15 indicators to compare differences in these cities’ recovery efforts, before diving into what has worked for the cities that are showing strong signs of recovery — and what is not working for those still struggling with disinvestment, vacancy, population loss and economic decline.

Key findings from the report include:

Based on the Lincoln Institute of Land Policy report and other recent academic research, the following potential strategies emerge:

Reestablishing a coherent, cohesive central city is a crucial part of all successful revitalization efforts. Suburbanization has pulled U.S. cities apart for nearly a century, splitting them into widely distributed employment areas and residential neighborhoods connected only by highways. The counterweight to that is a fully developed, mixed-used city center with plentiful transit options for people of all interests, ages and incomes.

The Lincoln Institute study concludes that American’s core cities can achieve revitalization and sustained growth with “constructive support from state and federal governments” in the form of adjusted regulations, funding programs, and other ways they can support initiatives. Revitalizing cities also requires the right mix of new forms and directions for governance and economic activity; powerful assets; and capitalizing on an “historic can-do culture of achievement.”