In recent decades, low- and middle-income countries such as Chile, Costa Rica, Cuba and China have succeeded in dramatically improving their citizens’ health. The number of people living below the poverty line has also fallen significantly in many large countries: Between 1981 and 2005, China’s poverty rate dropped from 84% to 16%, India’s from 60% to 42% and Brazil’s from 17% to 8%. Within Africa, Ghana and Senegal halved their incidence of poverty between the mid-1990s and 2010. Furthermore, the highest rates of GDP growth over the past decade have been in East Asia (8%), South Asia (7%) and Sub-Saharan Africa (5%) — “the three regions which account for the bulk of absolute poverty” globally, according to a 2013 World Bank study.

Despite these positive trends, there continue to be massive gaps in the degree of human development among countries. Comparing the lives of people in Norway, Australia and Switzerland — the three most developed countries, according to the United Nations — to those in Congo, Niger and the Central African Republic — the least developed — astonishing disparities emerge across all measures of health, wealth, security and well-being. And the World Bank’s most recent data show that 48.5% of the population in Sub-Saharan Africa still lives on $1.25 or less a day.

For more than two decades, the United Nations Development Programme has issued an annual review that details the quality of life for people around the world. The “Human Development Report 2014: Sustaining Progress: Reducing Vulnerabilities and Building Resilience,” by lead author Khalid Malik and a team of researchers, focuses on “structurally vulnerable” groups of people. While the report acknowledges that “overall global trends are positive and … progress is continuing” and that “globalization has brought benefits to many,” it focuses on the precariousness of life for billions around the world. The authors state that the “sustained enhancement of individuals’ and societies’ capabilities is necessary to reduce these persistent vulnerabilities — many of them structural and many of them tied to the life cycle.” The report also includes a ranking of all countries, 1 to 187, in its Human Development Indices table. 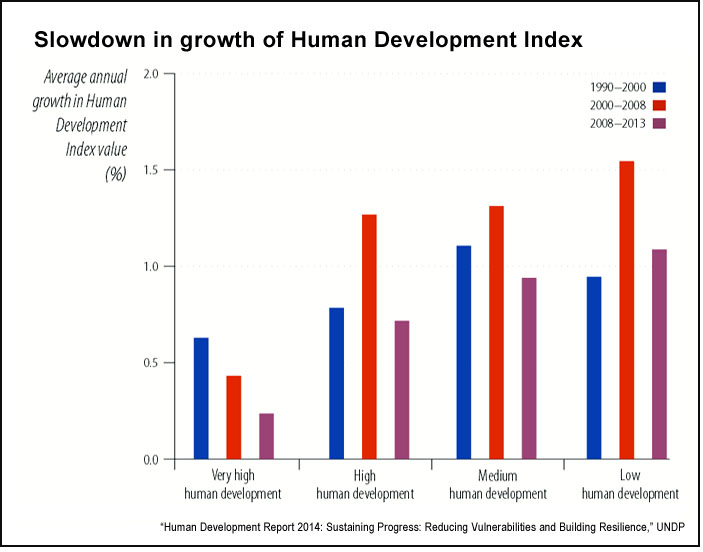 Beyond the analytical data, the report also spells out how policymakers can work to make societies more resilient: The authors call for “universal access to basic social services, especially health and education; stronger social protection, including unemployment insurance and pensions; and a commitment to full employment, recognizing that the value of employment extends far beyond the income it generates.”