Over the last decade, the number of people connected to the Internet worldwide has grown rapidly, rising from 910 million in 2004 to nearly 3 billion in 2014. Penetration is highest in the developed world — 88% in North America and 81% in Western Europe, while in Asian countries such as South Korea and Japan, more than 90% of the population have access. Internet use is also climbing in the developing world, often through the use of smart phones.

The Internet has powered the growth of firms in tech hubs such as Silicon Valley and has the potential to change the way a broad range of businesses operate. It has already shaken up the news media and has even invented an entirely new sector — the sharing economy. In the developing world, some farmers already use Internet-equipped smartphones to monitor market prices, and mobile systems such as Kenya’s M-PESA have provided millions of people with access to financial services. Such “mobile leapfrogging” can help bridge the digital divide.

To investigate the potential impact of the Web on business performance in the developing world, a 2015 study, “Overcoming Obstacles: The Internet’s Contribution to Firm Development,” analyzed data from firms in 117 nations over a five-year period, 2006 to 2011. Authored by Caroline Paunov of the OECD and Valentina Rollo of Switzerland’s Graduate Institute of International and Development Studies, the report looks at whether constraints in developing economies limit potential positive impacts of the Internet on firm performance.

The scholars based their work on data from more than 46,000 firms surveyed by the World Bank. The largest proportion, 40%, came from Latin America and the Caribbean, with 27% from Africa, 22% from Eastern Europe, Central Asia or the Middle East, and 11% from the East Asian Pacific or South Asia. As a measure of Internet access, the study looked at firms’ use of email to communicate with suppliers and customers. 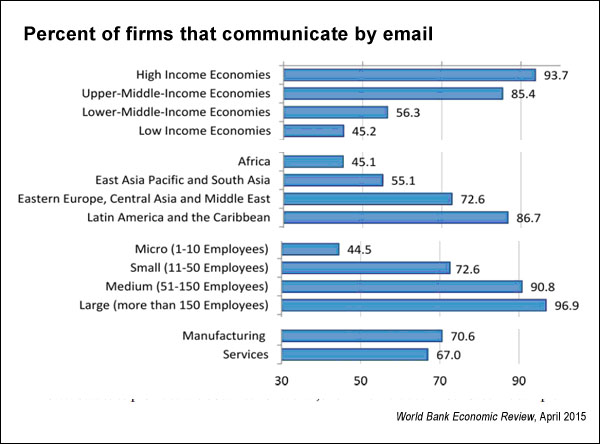 The authors conclude that their findings leave reason for optimism about the potential for the Internet to boost productivity in developing economies: “We show that the Internet had positive impacts on firm’s productivity across world regions and across different stages of development. Even firms facing financial constraints, frequent power outages, skills shortages, corruption, and cumbersome labor regulations gained.”

Related research: A 2013 paper from Jonathan Obar at Michigan State and the University of Toronto and Philip Napoli at Fordham University, “Mobile Leapfrogging and Digital Divide Policy,” highlights the developing world’s patterns of Internet access and examines the tradeoffs between mobile and PC-based platforms.

How is the Internet fueling economic growth in the developing world? New research