One of the enduring myths of the United States is that anyone with a dream and the will to succeed can make it here. Outliers such as Facebook’s Mark Zuckerberg and Microsoft founder Bill Gates are often cited — both are college dropouts who became billionaires — but research indicates that, since the 1980s, income inequality in the U.S. has grown while social mobility has declined.

In a 2013 study, University of California, Berkeley, economist Emmanuel Saez found that the top earners in the United States have not only made a full recovery from the recession, they’re also capturing an ever-increasing portion of productivity gains, income and assets. Research for the Equal Opportunity Project at Harvard and Berkeley also found that intergenerational income mobility — the odds of a child from the bottom fifth of income making it to the top fifth as an adult — were less than 5% in cities such as Atlanta, Charlotte and Indianapolis — “lower rates of mobility than any developed country for which data are currently available.” If unchallenged, the result could be self-reinforcing, with less-fortunate citizens locked out of all paths to success.

Research in this area has found that tax expenditures aimed at low-income taxpayers can significantly improve their economic opportunities. Education can play a role as well: Children receiving early childhood education have been shown to have higher levels of income and socioeconomic status later in life, and early educational interventions have been found to have wider economic and social benefits. According to a June 2013 report by the Brookings Institution, education inequality is growing at the same time as income inequality, an indication that levels of social mobility in the United States could continue to worsen without significant changes.

Another fiscal approach to increasing income mobility is an inheritance tax — also known as an estate tax. In the United States, rates have been falling for decades. The threshold is now $5.25 million per person — up from $675,000 in 2001 — meaning that only roughly 3,800 households are expected to pay any inheritance tax this year. The cut-off rises even further, to $5.34 million, in 2014. As the chart below shows, when the tax does apply, the rate has also fallen: From 1941 to 1976 it stood at nearly 80%, but is now 35%. 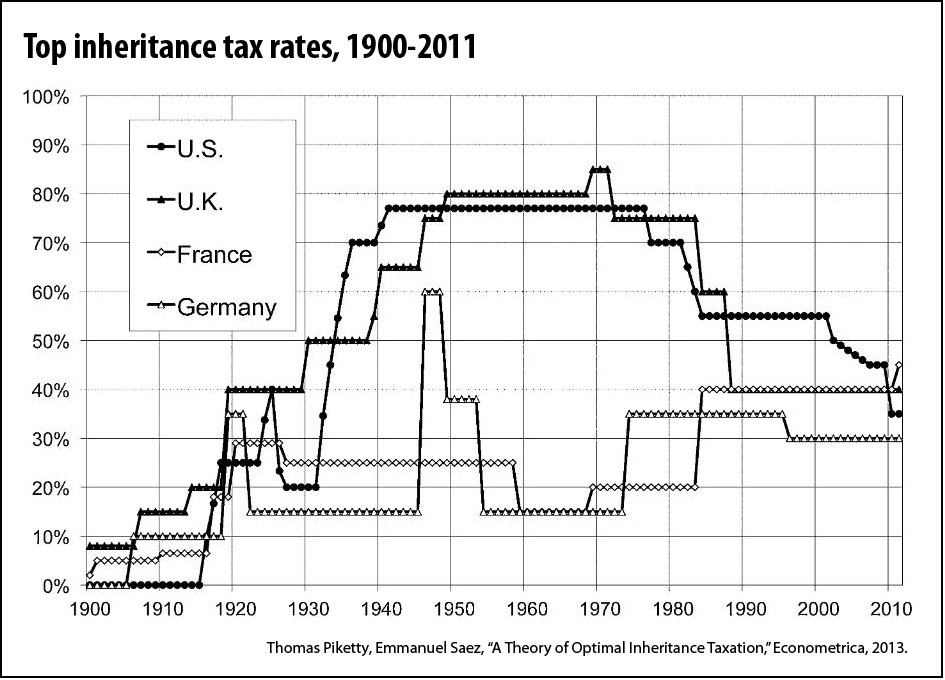 As with all tax policies, those on inheritances pose a trade-off between equity and efficiency: Higher rates could lower economic efficiency by reducing the incentive to work, save and leave bequests. Higher estate taxes could also lead to increasingly complicated avoidance actions by those subject to them. Yet inheritance taxes also promote equity, both directly and indirectly: They remove some of the inherent advantage of being born to wealthy parents and allow more to be spent in providing education and other assistance to lower-income residents.

A 2013 paper in the journal Econometrica by Saez and Thomas Piketty of the Paris School of Economics, “A Theory of Optimal Inheritance Taxation,” seeks to formalize the trade-off between equity and efficiency. The researchers create optimal inheritance tax formulas based on the responsiveness of bequests and labor supply, society’s preferences for fairness, and actual levels of wealth inequality and social mobility. Data for the United States and France are both analyzed.

A related 2010 study from Yale University and U.C. Berkeley published in Politics & Society, “Winner-Take-All Politics: Public Policy, Political Organization and the Precipitous Rise of Top Incomes in the United States,” examines the economic, social and political reasons for rising income inequality in the United States. The results of the research challenge the premise that the growing gap between rich and poor can be explained by factors such as the technological revolution or globalization. Instead, the study points to the inability of the political system to “adapt to the shifting realities of a dynamic economy and society,” partisan gridlock, increased lobbying and the decline of unions.

Optimal level of inheritance taxes in a context of rising inequality