According to 2012 estimates by the World Health Organization, as many as 34 million people globally are infected with HIV, a condition that causes progressive failure of the immune system.

Due to the spread of the virus through intimate contact with multiple people, female sex workers carry a significant portion of the global burden of HIV, with prevalence rates averaging 11.8%, according to a comprehensive report by the World Bank. That report found that rates were as high as 36.9% (in sub-Saharan Africa), and that “across regions, HIV prevalence among female sex workers was 13.5 times the overall HIV prevalence among the general population of women 15-49 years old.”

International health organizations have worked to reduce the proliferation of HIV among female sex workers through education campaigns and condom dispersion, but such interventions are challenged by the fact that many are involved in prostitution involuntarily. Women coerced into sex work may experience the highest rates of HIV infection, as much as double the rate of other sex workers. Why? Researchers at the Harvard School of Public Health say that sexual violence, coupled with decreased condom use, could be the most significant factors.

In a 2013 study “How Does Sex Trafficking Increase the Risk of HIV Infection? An Observational Study from Southern India,” published in the American Journal of Epidemiology, the researchers interviewed more than 1,814 sex workers in southern India. They found that forced prostitution along with sexual violence explains much of the association between sex trafficking and HIV.

The authors recognize the limitations of the study, as many of the most marginalized female sex workers are kept isolated from others and thus are unlikely to participate in public-health programs or surveys. However, the numbers indicate that women who are forced into prostitution are at a high risk of HIV infection. This finding “strongly indicates the need to integrate sex-trafficking prevention efforts within HIV prevention services among female sex workers,” the authors state.

The World Bank provides the following chart to illustrate prevalence rates in India and surrounding regions; it highlights the “significant regional variation,” attributed to the divergent policies, cultures and interventions in various cities: 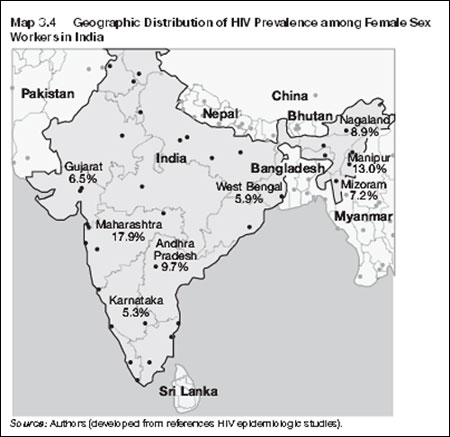 Sex trafficking and HIV: An observational study from Southern India