The 2014 Ebola outbreak in West Africa dramatically raised awareness of the global burden of infectious disease and raised questions about the preparedness of public health systems. In February 2016, the public scrambled to understand the implications of the Zika virus after the World Health Organization designated it as an international public health emergency because of the suspected relationship between Zika and a rise in cases of a rare congenital condition called microcephaly in Brazil. Although non-communicable diseases are the leading cause of morbidity and mortality in most developed nations, infectious disease remains a major public health concern in the United States and around the world.

Defining and examining the global distribution of infectious disease, in both time and location, is a major research priority. These “spatio-temporal patterns” allow researchers to examine how and why infectious disease does or does not spread. Three terms are used in epidemiology — the study of the spread, causes and consequences of disease — to describe disease distribution:

Note that the term “outbreak” can refer to an epidemic or pandemic. Epidemiologists’ ability to define a disease distribution as epidemic, endemic or pandemic allows health workers, clinicians and policy makers to set local and global priorities for controlling illness and promoting health throughout a population level.

A 2014 study published in the Journal of the Royal Society Interface, “Global Rise in Human Infectious Disease Outbreaks,” examines the global changes in the frequency of outbreaks of infectious disease between 1980 and 2013. In all, the dataset covered 12,102 outbreaks of 215 diseases, with 44 million individual cases in 219 countries around the world. The researchers, based at Brown University, sought to examine the relationship between the location and timing of disease outbreaks and the characteristics of outbreak sites, such as the presence of certain animals that transmit disease to humans. 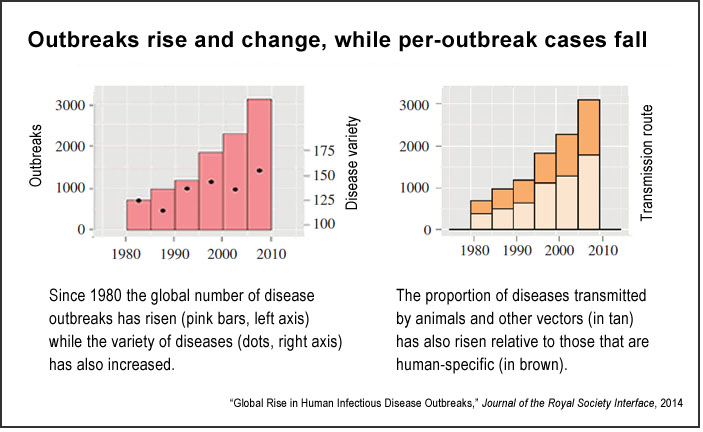 The scholars control for the possible confounding role of the Internet, starting in 1990, but note that “it is beyond the scope of this report and our current dataset to determine the role the Internet has played in outbreak detection and reporting.” However, they state that “it is becoming increasingly clear that the Internet can improve disease reporting by supplementing formal surveillance with publicly generated digital disease surveillance.”

Related research: A 2014 report by the U.S. Centers for Disease Control and Prevention found that salmonella was responsible for more cases of illness, hospitalizations and deaths than any other food-borne pathogen. A 2012 study published in Lancet Infectious Diseases reviews non-infectious disease risks from mass-gatherings. A 2011 report by the World Health Organization reviewed the causes of death globally, and identified ways by which to measure progress in infectious disease, among other types and indicators of morbidity and mortality.

She joined Journalist’s Resource in 2015 after working as a reporter for newspapers and radio stations in the U.S. and Central America, including the Orlando Sentinel and Philadelphia Inquirer. Her work also has appeared in publications such as USA TODAY, the New York Times, Chicago Tribune and Washington Post. She has received a multitude of national, regional and state-level journalism awards and was named as a Pulitzer Prize finalist in 2013 for an investigative series she led that focused on hazing and other problems at Florida A&M University. Ordway was a 2014-15 Fellow of Harvard’s Nieman Foundation for Journalism. She also serves on the board of directors of the Education Writers Association. @DeniseOrdway

“Economic effects of COVID-19 have been enormous on LGBTQ people, so it’s not just a viral reality,” says Dr. Perry Halkitis, dean of Rutgers’ School of Public Health, whose research focuses on LGBTQ populations. “It’s a social reality. It’s an economic reality. It’s a psychological reality.”

By studying research on how the news media portray Asian Americans, journalists can gain insights into how their work is perceived and its consequences.

The conversation about newsroom diversity, race in journalism and coverage of race in the news is one the profession has been circling back to for decades. These seven papers can help inform the discussion.