The American Time Use Survey has been conducted by the U.S. Bureau of Labor Statistics (BLS) since 2003. The data collected provide a window into how Americans do everything from work to play, dining to child care. The latest survey results, released in June 2013, show how citizens are responding to a difficult job market, and they spotlight trends such as the rise of those who work from home (some 23% of those employed now do that.) For economic perspective on the data, see the Wall Street Journal‘s analysis.

As the debate over gender equality and changing norms relating to home and work continues, the BLS data show how certain structural differences persist for men and women in terms of daily tasks. This is true even as some 40% of households are now headed by “breadwinner moms,” according to Pew Research Center survey data. For those looking to explore gender and family in American society in more depth, the BLS findings can also be seen as a useful complement to the May 2013 “Modern Parenthood” report from Pew.

Below are some key points excerpted from the American Time Use Survey’s 2013 release:

Related research: A June 2013 report from the Pew Research Center titled “The New American Father” offers insights into changing roles for men. In an analysis of Census data, Pew also finds that some 8% of households now are headed by single fathers — representing a ninefold increase since 1960. More facts relating to motherhood and work can be found here. And this chart from Pew shows their findings relating to the changing division of labor over time: 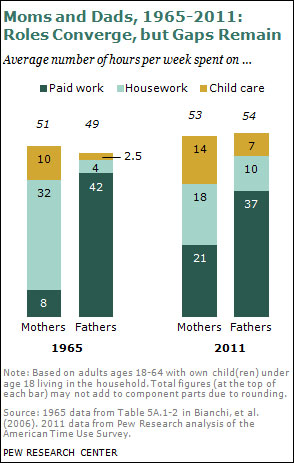 Further, a 2013 conference at Harvard Business School produced more than a dozen working papers and research essays focused on the theme of “Gender and Work: Challenging Conventional Wisdom.” Researchers at the Center for Gender Research in the Professions at University of California-San Diego released a report in March 2013 debunking the conventional wisdom that women are beginning to outpace men in the workplace.  The report, “The Persistence of Male Power and Prestige in the Professions: Report on the Professions of Law, Medicine, and Science & Engineering,” found that even professional women in prestigious positions lag behind men, who still wield considerable clout in the office. Women, however, continue to be well-represented in the lower ranks of the service industry.

Gender, work and family in America: Differences in time use