Student loan debt has become an increasing problem in recent years. As the New York Federal Reserve notes in a 2013 report, “Over the last eight years, aggregate educational debt outstanding has almost tripled, rising to nearly $1 trillion and becoming the largest consumer liability after mortgages.”

No other form of debt — auto loans, home equity, credit cards — has seen this sort of steady rise for Americans. Between 2004 and 2012, the number of borrowers and the average amount borrowed each went up by 70%. Still, the overall debt for individual students varies significantly; most students end up with a burden of less than $25,000, and nearly 40% have less than $10,000, as the New York Fed highlights: 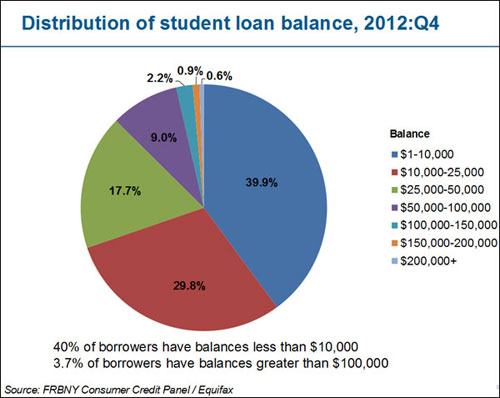 A college degree, particularly one in a science and technology discipline, can lead to increased earnings over the course of a lifetime. While the cost of higher education has soared since 1980, aspiring students of limited means can receive financial aid — typically some combination of federal grants, low-interest loans, and institutional work-study and awards — to pay for their education. For instance, the Stafford Loan program disbursed approximately $24 billion over the 1999-2000 academic year, $31 billion in the 2003-2004 year, $36 billion in 2007-2008 and $56 billion in 2009-2010.

It is not clear to what degree these loans help students complete their education. A 2013 study from the College Board Advocacy and Policy Center found that only 25% of Pell Grant recipients 25 or younger completed their bachelor’s degrees six years later, and the rate was just 3% for older students. To what extent do finances play a role in college completion rates?

A 2013 report from MPR Associates for the National Center for Education Statistics, “Federal Student Loan Debt Burden of Noncompleters: Statistics in Brief,” examines federal student debt burden accrued by students who did not complete a postsecondary credential within six years. The researchers analayzed longitudinal National Center for Education Statistics data of postsecondary students who first enrolled in 1995-1996 (and their status as of 2001) or 2003-2004 ( and status as of 2009) to better understand completion rates, borrowing habits and debt burdens. (Note: These figures only reflect federal loans and do not reflect total debt for students, as many loans also come from private sources.)

“While student loans improve access to postsecondary education, repaying them has become increasingly difficult for students who are unemployed, underemployed or who earn a limited income,” the researchers write. Unfortunately, “these circumstances are more common among students who do not complete a degree than among those who do.”