Exploring the relationship between income inequality and rates of innovation

Research has consistently shown that income inequality in the United States has risen steadily over the past 30 years, and that the trend accelerated since the Great Recession. A 2013 study from U.C. Berkeley’s Edward Saez found that top earners were capturing an ever-increasing portion of income gains — including 95% of those during the 2009-2012 recovery. The reasons are complex, but include the spread of low-wage jobs, the decline of trade unions, an increasingly polarized job market and a vertiginous rise in CEO compensation.

Most economists agree that similar trends are playing out in other industrialized countries: A 2014 paper from the OECD found that in the 1980s, the top 1% of earners accrued less than 10% of all income in every OECD country except Germany. By 2010, this had more than doubled in the U.S. and United Kingdom, and had risen strongly elsewhere. A 2014 study from Thomas Piketty and Gabriel Zucman of the Paris School of Economics also found that wealth-income ratios have been rising in each of the top eight developed countries over the last four decades, from 200% to 300% in 1970 to 400% to 600% in 2010. “In effect, today’s ratios appear to be returning to the high values observed in Europe in the 18th and 19th centuries (600% to 700%).”

In a 2015 working paper for the National Bureau of Economic Research (NBER), researchers from Harvard University, University of Pennsylvania, University College London, INSEAD and Banque de France further explore this subject. The report, “Innovation and Top Income Inequality,” uses panel data over the period of 1975-2010 across U.S. states and examines the links among innovation, top income inequality and social mobility. The number of patents granted was used as a measure for state innovativeness. 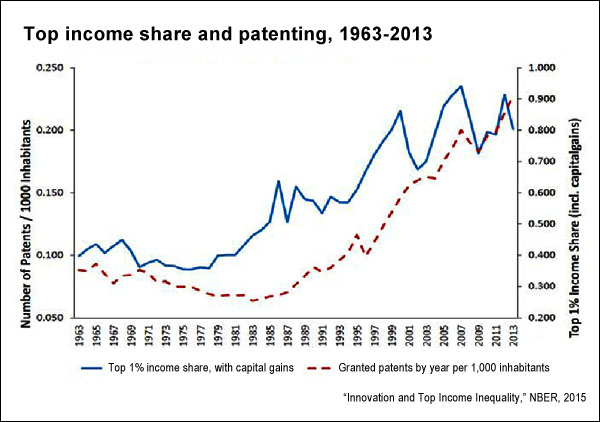 “Our results show positive and significant correlations between innovativeness or frontier growth on the one hand, and top income shares or social mobility on the other hand,” the scholars conclude. They note that the research raises important questions, such as “how should we combine tax policy with other policy instruments (competition and entry policy, patent policy, R&D subsidies,…) to achieve more inclusive growth, i.e. reconcile the goals of enhancing innovation-based growth, enhancing social mobility, and avoiding excessive income inequality?”