The Earned Income Tax Credit is one of the largest anti-poverty programs in the United States: In 2010 approximately 27 million families and individuals qualified, and more than $59 billion in tax benefits were distributed. Research has found numerous positive effects from the EITC, including reduced poverty, better health and even lower rates of smoking and reduced depression for some parents. Long-term benefits for children are noteworthy, particularly improved math and reading skills.

Economist Raj Chetty of Harvard University has been involved in a number of studies looking at the long-term effects of the Earned Income Tax Credit. A 2011 study by Chetty, John N. Friedman of Harvard University and Jonah Rockoff of Columbia University found that children whose parents received EITC benefits had a higher probability of attending college and earning more than they would have otherwise. A 2012 study from Chetty, Friedman and Emmanuel Saez of UC Berkeley looked at how knowledge of tax policies could affect recipients’ earnings.

The most recent study, from 2013, “The Economic Impacts of Tax Expenditures: Evidence from Spatial Variation across the U.S.,” is part of the Equal Opportunity Project. It looks at intergenerational income mobility — the chance of a child from the bottom fifth of income rising to the top fifth by the time he or she is an adult. The researchers were Chetty and Nathaniel Hendren of Harvard University; and Saez and Patrick Kline of UC Berkeley. (All are affiliated with the National Bureau of Economic Research.) They based their research on anonymous earnings records from millions of U.S. families with children born in 1980 or 1981 and who were citizens as of 2013. The parents’ 1996-2000 pre-tax income was compared with that of their children in 2010-2011, when they were approximately 30 years old. 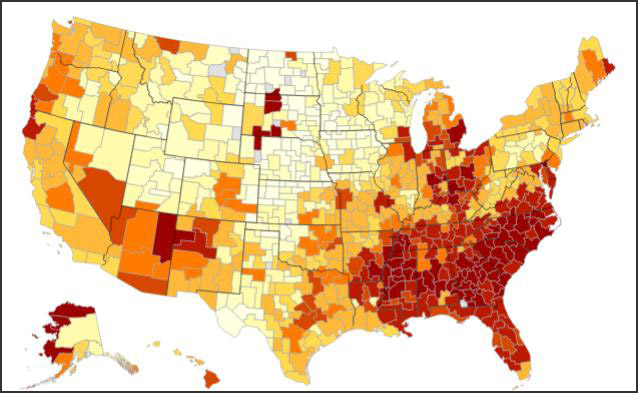 Families were grouped in 741 zones based on commuting patterns, and the researchers analyzed two factors: First, “relative mobility,” which was economic outcomes for children from high- and low-income families. Second, “absolute upward mobility,” which was economic outcomes for children whose parents earned approximately $30,000 a year and thus were eligible for EITC and the Child Tax Credit. “Hence, our statistics measure how well children do relative to those in the nation as a whole rather than those in their own particular community,” the researchers states. (In the chart above, relatively high mobility is shown as tan; low mobility is red.)

“Tax expenditures” are defined primarily as tax write-offs that individuals and families can take on their federal taxes; in effect, these “hidden” social programs embedded in the tax code represent a form of federal government spending.

“What is clear from this research is that there is substantial variation in the United States in the prospects for escaping poverty,” the researchers state. “There are some areas in the U.S. where a child’s chances of success do not depend heavily on his or her parents’ income. Understanding the features of these areas — and how we can improve mobility in areas that currently have lower rates of mobility —  is an important question for future research.”

Related research: A 2013 study in the Journal of Economic Perspectives, “Income Inequality, Equality of Opportunity and Intergenerational Mobility,” looks at the relationship between intergenerational mobility and inequality, as measured by the Gina Coefficient. “The goal is to explain why America differs from other countries, how intergenerational mobility will change in an era of higher inequality, and how the process is different for the top 1 percent,” writes the study’s author, Miles Corak. A post by Justin Wolfers in the Freakanomics blog, “Is Higher Income Inequality Associated with Lower Intergenerational Mobility?” looks at questions that Corak’s study addresses.

Also of interest is a study by Chetty, Friedman and Rockoff, “Long-Term Impacts of Teachers: Teacher Value-Added and Student Outcomes in Adulthood,” looked at “value added” test scores to explore the impact of instructors — high and low quality — on students’ lives after they leave school. They found that having a better teacher for a single grade increases by 0.5 percentage points a student’s probability of attending college by age 20. Having a better teacher for a single grade also increased a student’s earnings at age 28 by 1%.

Economic impacts of tax expenditures: Evidence from spatial variation across the U.S.