Cars have come a long way in the last 10 years, to say nothing of the last 100, but the consequences aren’t uniformly positive. “Distracted driving” might once have involved a cow at the side of the road or a passenger with, say, a ukulele. Now it’s a smartphone, an “immersive” entertainment system or a dashboard full of electronics that clamor for our attention. And the results can be fatal: According to the Centers for Disease Control and Prevention (CDC), in 2012 more than 3,200 people were killed in car crashes involving distracted driving, and the Federal Highway Administration estimates that up to 10% of all collisions involve driver distractions. Vulnerable road users are particularly at risk: A 2013 study in Public Health Reports found that the pedestrian fatality rate due to distracted driving increased 45% from 2005 to 2010, and for cyclists it jumped 32%.

As with state laws on drunk driving, regulations intended to reduce distracted driving are inconsistent, and for the moment target only cellphone use. As of 2013, 41 states and the District of Columbia ban texting while driving; 11 states and the District of Columbia prohibit drivers from using handheld cellphones. Some states prohibit novice drivers from using hands-free devices, but all currently permit adults to do so.

Laws banning texting have shown some effectiveness: Single-driver accidents in states where it is universally prohibited showed an 8.1% decrease — but only if texting is considered a “primary offense,” allowing officers to pull over drivers. Enforcement is often seen to weak, however, and human nature and even the media play a role: For example, an October 2013 Boston Globe story on Columbus Day traffic in Massachusetts included numerous tweets and texts from drivers — all presumably sent from behind the wheel.

A central question is what safety benefits are provided by hands-free technology, if any. As indicated by the Centers for Disease Control and Prevention, distraction comes in three forms: Visual (eyes not on the road), manual (hands off the wheel) and cognitive (mind not on driving). Voice-operated systems require cognitive effort, and the more they demand — from cellphones to GPS systems to voice-operated infotainment systems — the less there is for actually driving and the risks it involves.

Earlier research has indicated that hands-free systems show no safety benefits over hand-held devices. While such findings have been disputed by industry lobbying groups, a 2013 study confirms the risks posed by such technology. Published in Applied Cognitive Psychology, “How Speech Modifies Visual Attention,” looks at how devices that require speech activation can interfere with visual attention.

The researchers, led by Ian Spence of the University of Toronto, conducted a series of experiments to explore how tasks requiring verbal or visual interaction affected their ability to find an object in clutter displayed on a computer screen. “It is the ability of the attentional system to select a target object among distractors, and to do so quickly, which is most relevant to everyday tasks such as driving,” the researchers write.

The study findings include: 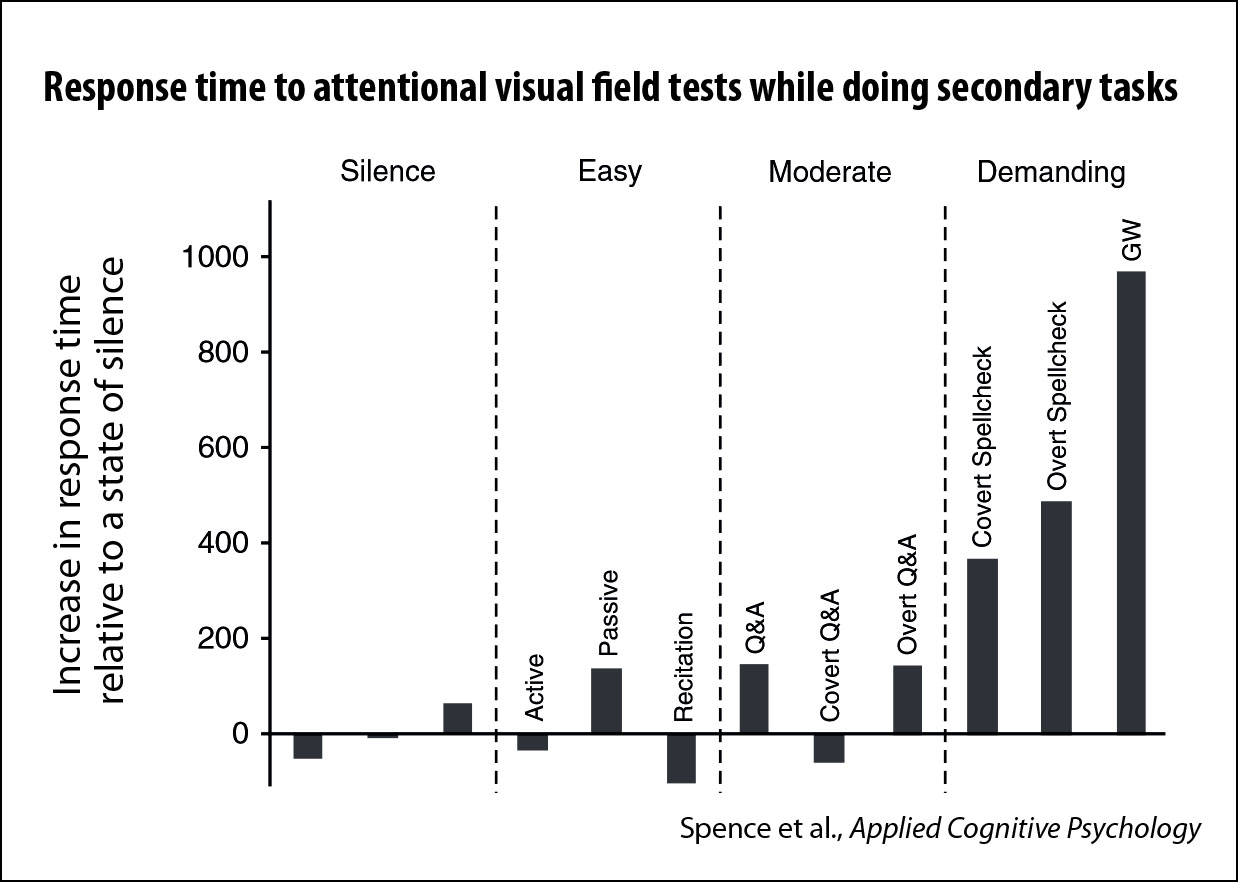 The researchers conclude: “The [increase in response time] associated with preparation for speech (thinking) was large (from about 200 to 900 milliseconds), irrespective of whether or not the target was relatively central (10°) or peripheral (20° or 30° from fixation),” they state. “Because sudden events, such as road hazards during driving, have a lower probability of being detected in the periphery, delays in responding make the production of speech even more dangerous…. A driver who brakes 200, 400 or 900 milliseconds earlier will either avoid the collision or be traveling more slowly if and when the crash occurs. The reduced energy that is dissipated will translate to a lower probability of severe injury or fatality.”

Thus, even when drivers keep their hands on the steering wheel and eyes on the road, simply having to think about and execute voice commands significantly degrades their ability to notice and respond quickly to external events, particularly when they come from the periphery — a vehicle that changes lanes suddenly or a pedestrian stepping into a crosswalk, for example. A delay of just under 1 second seems minor, but at 60 miles per hour, automobiles travel nearly 90 feet. In addition, even high-performance cars in dry conditions need more than 110 feet to stop; SUVs require as much as 150 feet.

Related research: A 2013 study conducted by University of Utah researchers and sponsored by the AAA Foundation for Traffic Safety, “Measuring Cognitive Distraction in the Automobile,” comes to similar conclusions. In the study, researchers measured subjects’ reaction times while performing a series of tasks in the laboratory, in driving simulators and while operating instrumented vehicles. Tasks such as listening to the radio or an audio book were found to be moderately distracting. Conversing with a passenger was more distracting than passive tasks, but less than using a hand-held cellphone. (Passengers in theory provide a measure of security: Because they’re not driving, they can dedicate more cognitive awareness to external events; in addition, they have incentive to watch out for their own well-being.) Finally, the use of speech-to-text systems had a large cognitive distraction rating, more than triple that of operating a car in silence. “The data suggest that a rush to voice-based interactions in the vehicle may have unintended consequences that adversely affect traffic safety,” the researchers conclude.