In 2010 the Dodd-Frank Wall Street Reform and Consumer Protection Act was passed, requiring companies to disclose pay differentials in the form of CEO-Employee pay ratios, among various other reforms intended to better inform the American public about the activities of corporations and discourage behavior that could contribute to another financial crisis. Although the legal details of that mandatory disclosure remain in dispute, the pay disparity between CEOs and employees has drawn significant attention from the media and criticism from advocacy groups. 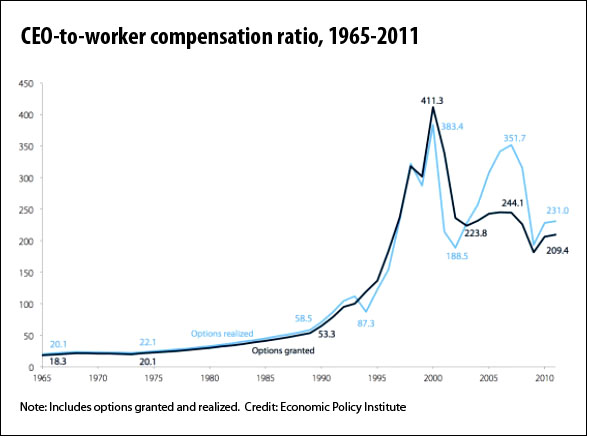 Despite the increased attention to the issue, limited research has been done on what determines this disparity or what its effect is on employee motivation and productivity. A 2013 paper by researchers at Northeastern University and Bentley University published in the Journal of Banking and Finance, “The Determinants and Effects of CEO-Employee Pay Ratios,” utilizes data on executive compensation from the Standard and Poor (S&P) ExecuComp database, and on employee compensation from CompuStat. (An open-access version of the paper is available at SSRN.) The authors, Olubunmi Faleye, Ebru Reis and Anand Venkateswaran, examine the relationship between relative pay, measured by the CEO-employee pay ratio, and employee productivity, measured by revenue per employee, taking into account various firm characteristics such as size, performance, board structure and other factors.

“These results suggest that observed pay ratios between top executives and ordinary employees arise mainly from the relative ability of workers and executives to negotiate higher compensation with the relevant counterparty,” the authors state. “Workers earn more and pay ratios are lower when ordinary employees enjoy relative strength in negotiating with management, for example, when the workforce is highly skilled or unionized and employees are not easily replaceable.” Furthermore, they find “a positive productivity effect in settings where tournament incentives are plausibly stronger, such as when the firm has fewer employees who are informed on executive pay or are not unionized.”

The determinants and effects of CEO-employee pay ratios