What is the “debt ceiling” and why does it matter?

At the most basic level, it is the limit that Congress places on the U.S. Treasury in terms of how much debt it can issue. The Treasury has been at its technical limit — $16.699 trillion — since May, but it has been using certain budgeting tactics, so-called “extraordinary measures,” to get around the stated limits. But those measures will shortly no longer be viable, if Congress does not act.

The American public has heard increasing talk among policymakers in Washington of the possibility that the United States might default on its debt obligations because of a failure to reach political agreement. Currently, $11.9 trillion of the debt is held by the global public; $4.8 trillion is in government accounts.

It is worth recalling that in August 2011 — the last time there were serious concerns over default — Standard & Poor’s, a leading rating agency, downgraded America’s credit rating.

A Treasury Department report issued October 3 notes that “brinksmanship” over the debt ceiling in 2011 left “long-lasting scars on financial markets” and could lead again to “sharp declines in household wealth.” The report notes: “Wealth is an important determinant of household consumption spending, and consumption spending accounts for about 70 percent of GDP. From the second to the third quarter of 2011, household consumption fell $2.4 trillion…. The 30-year conventional fixed-rate mortgage spread over Treasury yields jumped by as much as 70 basis points late in the summer of 2011…. Consumer and business confidence were falling in 2011, and as the debate about the debt limit progressed, business and household confidence fell to levels that are typically only seen during recessions. It took months before confidence recovered, even though, ultimately, there was no default.”

As FactCheck.org, a project of the Annenberg Public Policy Center, pointed out during that round of debate in 2011, politicians advanced a number of falsehoods and distortions about the debt ceiling that were then echoed in the news media. Some of the same rhetoric is now reemerging.

In a September 2013 policy brief, the nonpartisan Congressional Budget Office stated that “the Treasury estimated that its ability to borrow under those extraordinary measures will be exhausted no later than October 17, leaving a cash balance of approximately $30 billion. The … CBO currently projects that the Treasury will exhaust all of the borrowing authority created by those measures, as well as its cash balance, between October 22 and the end of the month. (It is possible, however, that the date could fall outside of that range.)”

If negotiations go down to the wire — or past October 17 — timing will be important. Every month the Treasury Department sees huge flows of money going in and out on a set schedule, although the numbers can vary day to day. For example, on October 23 some portion of $12 billion in Social Security payments are expected to be made. On November 1, some $67 billion for benefits and entitlement programs will need to go out. Meanwhile, every day about $7 billion comes in from citizens whose paychecks are deducted to cover their annual taxes. Calculating the precise flows and anticipating exact account balances is extremely difficult, officials say.

The CBO report concludes: “If the debt limit is not increased before the extraordinary measures are exhausted, the Treasury will not be authorized to issue additional debt that increases the amount outstanding. (It will be able to issue additional debt only in amounts equal to maturing debt.) That restriction would severely strain the Treasury’s ability to manage its cash and could lead to delays of payments for government activities and possibly to a default on the government’s debt obligations. By CBO’s estimate, depending on the amount and timing of cash flows, the Treasury might be unable to fully pay its obligations anytime from October 22 on.” 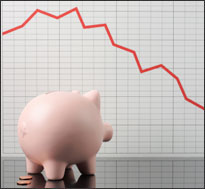 Further, under a default there are no clear rules for sorting out who or what gets paid first, the CBO notes. This raises a key issue: The lack of a so-called “prioritization plan.” The House has passed a bill calling for a set of rules about who would get paid first if America cannot immediately make good on all debts due in a given period. But U.S. Treasury Secretary Jack Lew has said: “There is no way of knowing the damage any prioritization plan would have on our economy and financial markets. It would represent an irresponsible retreat from a core American value: We are a nation that honors all of its commitments.” The issue also relates directly to issues of market psychology — whether Wall Street and global markets would embark on a massive sell-off. Suffice it to say, the true consequences are unknowable.

Other research puts these issues in larger context. A 2013 paper published in the Annual Review of Economics, “Empirical Research on Sovereign Debt and Default,” provides historical insights. Based on data covering world economies from 1820 to the present, the authors — Michael Tomz of Stanford University and Mark L.J. Wright of UCLA and the Federal Reserve Bank of Chicago — find that there have been 248 defaults by 107 different state entities over those 193 years. The study notes:

The most frequent defaulters were Ecuador, Mexico, Uruguay, and Venezuela; each experienced at least eight distinct spells of default, exemplifying a phenomenon Reinhart & Rogoff (2004) call “serial default.” Ecuador and Honduras have each spent more than 120 years in default, beginning with their initial loans as members of the Central American Confederation in the 1820s, and Greece has been in default for more than 90 years of our sample. The largest default in history (by present value) was the 2012 Greek restructuring that covered more than €200 billion of privately held debt, followed by Argentina in 2001 and Russia in 1918.

Over the entire sample, Tomz and Wright find, “the mean length of a default across the entire sample is 9.9 years, dropping to 7.8 years for the period since 1970.” On average, creditors can expect losses on their investments in the range of 37% to 40%.

The debt ceiling and a potential U.S. default: Background research