Today more Americans are completing college degrees than ever before. However, over the past few years, rising costs of higher education coupled with a competitive job market have resulted in some dampened expectations among recent college graduates. In 2011, as the deep recession was still reverberating, the Pew Research Center asked Americans if they believed college was still worth it. While college graduates overwhelmingly believed their education was ultimately a good investment, 75% of respondents stated that college has become too expensive for most Americans. Since that time, a great deal more pessimism about higher education has found its way into popular culture and the mass media. But the statistical data make a very strong case that the benefits of college — the “returns to education,” as scholars say — are increasing on average.

A 2014 Pew survey and report, “The Rising Cost of Not Going to College,” indicates that not only are college graduates more professionally successful than their peers with less education, but that the “disparity in economic outcomes between college graduates and those with a high school diploma or less formal schooling has never been greater in the modern era.” The report analyzes economic data from the Current Population Survey (CPS), as well as responses to a Pew Research Center survey conducted in October 2013. The survey targeted a nationally representative sample of 2,002 adults. The report’s authors are Paul Taylor, Kim Parker, Rich Morin, Rick Fry, Eileen Patten and Anna Brown. 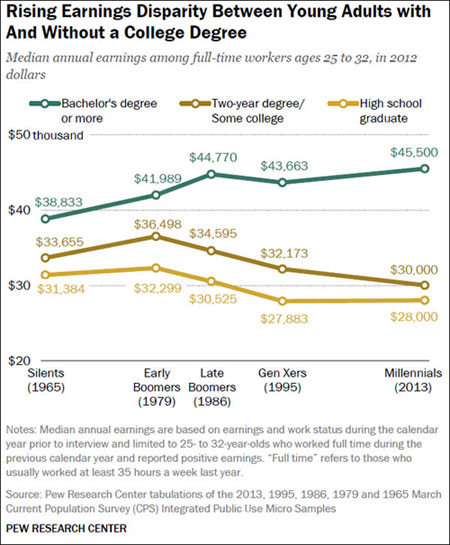 Related Research: A 2012 paper in the Annual Review of Sociology, “Social and Economic Returns to College Education in the United States,” provides comprehensive background on the state of the research field on these issues. The decision not to go to college, of course, may be influenced by more than just financial considerations. Many young people, particularly those from lower socioeconomic backgrounds, intend to go to college but either delay indefinitely or fail to complete a program. A 2013 study in The Journal of Higher Education examines these patterns and looks at the “penalty” for delaying entrance to college. Further, there are deep structural dynamics that prevent students from optimizing their success in higher education. A 2012 study for the National Bureau of Economic Research, “The Missing ‘One-Offs’: The Hidden Supply of High Achieving, Low Income Students,” looks at how top-tier higher education institutions still substantially fail to recruit talented young persons from disadvantaged backgrounds. Further, as new research from Stanford and Northwestern suggests, providing extra support for such students early on in college may be necessary to ensure better outcomes.

For those who skip college, challenges are rising: Pew Research Center