In May 2013 the National Highway Traffic Safety Adminstration released estimates of U.S. traffic fatalities for 2012, and the results were troubling: 34,080 people died in motor-vehicles crashes that year, an increase of 5.3% over 2011’s total and a reversal of the long-term downward trends. The meaning of the one-year shift is unclear and there is a great deal of nuance within all the numbers, but the litany of deaths remains sobering — an average of more than 93 every day.

The lowest year in recent history was 2011, when 32,367 people died on U.S. roads and highways. As horrifying as that number is, it actually constitutes progress: In 1994, 40,716 died on the roads — 26% more, and nearly 112 deaths per day. Beyond the absolute numbers, progress has been made in overall mortality rates: 1.1 per 100 million vehicle miles travelled in 2011 (it rose to 1.16 in 2012). Much of this is due to advances in vehicle safety — air bags, anti-lock brakes and increased crashworthiness. But technology can have its drawbacks as well: Since 1980 the average horsepower of U.S. cars more than doubled, and speed limits have risen significantly, greatly increasing the potential for damage, loss of life and injuries. Motorcycling is also on the rise, and fatality rates have increased in lockstep with its popularity and inherent riskiness.

A 2013 study in Research in Transportation Economics, “Comparing the Fatality Risks in United States Transportation Across Modes and Over Time,” looks at the historical trends to paint a fuller picture of where this all stands. The researcher, Ian Savage of Northwestern University, prefaces his findings with an important caveat on measures of “safety”:

The focus on fatalities is primarily motivated by a greater confidence that this measure of safety is reported more consistently and accurately across modes and time. In general, cross-sectional and time-series comparisons in fatalities are also indicative of differences in non-fatal injuries, illnesses, and property damage. Albeit that the correlation is not perfect. In particular, fatalities are a poor measure of some of the environmental risks associated with the transportation of oil products and hazardous materials. In addition many of the advances in safety in recent decades have focused on “crashworthiness” whereby design changes have been made to increase the survivability of crashes and mitigate the severity of injuries. Consequently it is possible that a reduction in fatalities may be partly compensated for by an increase in the number of injuries.

Savage’s analysis involved two datasets: The first involved the relative risk of different travel modes — cars, buses, planes, trains, and more — from 2000 to 2009; the second was a time-series analysis for each mode from 1975 to 2010. The findings of the study include: 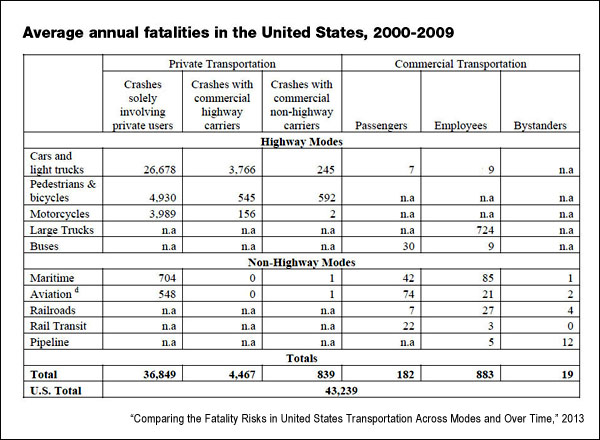 A related 2013 study published in the Annals of Emergency Medicine, “Safety in Numbers: Are Major Cities the Safest Places in the United States?” examined the overall injury risk in urban areas compared with suburban and rural areas. Among the conclusions: Rural counties demonstrated significantly higher death rates than urban counties — 1.22 times greater for the most rural compared with the most urban. The majority of the difference was in unintentional incidents such as accidents, but some increase in suicide risk was also seen in rural areas. Overall, the study finds, “U.S. urban counties were safer than their rural counterparts, and injury death risk increased steadily as counties became more rural.”

Also of interest is a 2013 report by the World Health Organization. “Global Status Report on Road Safety 2013: Supporting a Decade of Action.” The study was based on country-level data and included information on newer risk factors such as cell phone use while driving. Among the findings, the report states that more than 1.24 million people die every year as a result of road traffic injuries, making it the eighth leading cause of death globally, and the leading cause of death for young people aged 15-29. Based on anticipated trends, by 2030 road accidents are projected to be the fifth leading cause of death globally.