Following the June 2013 publication of an American Academy of Arts & Sciences report that calls for a renewed commitment to the humanities and social sciences, a wide-ranging societal discussion has unfolded about the relative importance — and market value — of college majors and disciplines such as English, sociology, political science and art history. There is broad talk of the humanities being in “crisis,” but the facts behind the debate are complicated.

Nationally, the percentage of those completing a bachelor’s degree in the humanities fell by half from 1966 to 2010, dropping from 14% to 7%. However, as statistics blogger Nate Silver has pointed out, this trend can be partly explained by the fact that more people are pursuing higher education. Bellwether institutions such as Harvard have also noted the decline in the number of undergraduate humanities majors — the percentage fell there from about 24% in 1964 to 17% in 2012. Many others have taken issue with these statistics; some point out that the numbers have typically fluctuated over the decades. (For other ways of measuring society’s engagement with the humanities, see the “Humanities in American Life” data, from the American Academy of Arts & Sciences.) 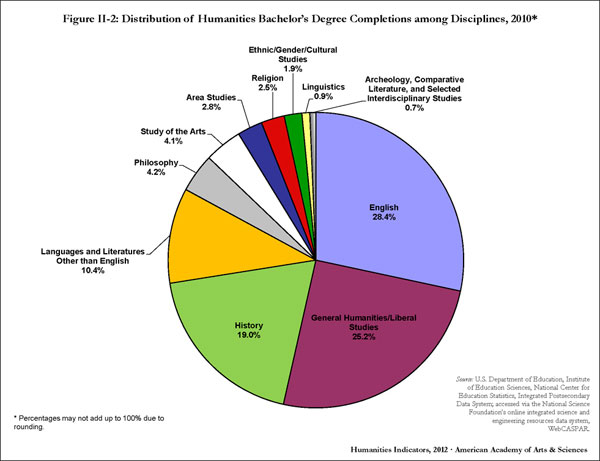 In addition, with troublingly high jobless rates since the Great Recession, more career-oriented decisions about majors might be reasonable to expect. There’s also a push to get more students to choose the science, technology, engineering and mathematics (STEM) fields, considered essential to foster U.S. innovation in the global marketplace.

But what does the research actually say about the correlation between major choice and near-term employment prospects? A 2013 report from the Georgetown Public Policy Institute, “Hard Times 2013: College Majors, Unemployment and Earnings,” analyzes American Community Survey data from the U.S. Census Bureau for the years 2010 and 2011. The authors, Anthony Carnevale and Ban Cheah, demonstrate that, although some predictable patterns are in evidence, there is no easy split between the sciences and the humanities in terms of assured job prospects. The overall unemployment rate for recent college graduates was 7.9% over the period studied, the researchers note.

Related research: A 2013 paper published in Monthly Labor Review, “Recent College Graduates in the U.S. Labor Force: Data from the Current Population Survey,” analyzes recent Census figures and provides a variety of insights. A 2013 study from the Pew Center on the States, “How Much Protection Does a College Degree Afford?” examines the value of a bachelor’s degree relative to lower educational attainment levels; a May 2013 Brookings Institution report, “Should Everyone Go to College?” provides insights on that issue, as well. A 2012 Rutgers University report, “Chasing the American Dream: Recent College Graduates and the Great Recession,” conducted a survey and found that many recent graduates are “under-employed,” meaning that they found only part-time work. And a 2012 study from Vanderbilt University’s Curb Center for Art, Enterprise and Public Policy, “Double Majors: Influences, Identities and Impacts,” examines who chooses to double major, motivations behind the choice, popular double major subject pairs, and how double majoring influences college and post-college experiences.

Further, a 2013 paper in the Review of Economic Studies, “A Major in Science? Initial Beliefs and Final Outcomes for College Major and Dropout” finds that “students enter college as open to a major in science as to any other major, but that relatively few students finish school with science as their outcome. This occurs because, relative to other majors, students are both more likely to leave science (if they started in science) and are less likely to change into science (if they started in a major other than science). In terms of major-specific factors that influence the major decision, we find a particularly important role for future grade performance….”