China’s rise as a major contributor to science and technology

In 2012 China’s total spending on research and development was one trillion yuan ($164 billion), just under 2% of its gross domestic product. The same year, the U.S. spent $447 billion, or 2.8% of its GDP. But as China’s economy continues to grow rapidly, so does its R&D spending — and it’s projected to overtake that of the United States by 2022. Scientific advances contributed 51.7% to China’s economic growth in 2011, and the country is betting that technical innovations can help it address many challenges, including the need to upgrade its industrial base, reduce air pollution and address growing inequality.

The Chinese government unveiled its “indigenous innovation” campaign in 2006, with a goal of turning the country into a “science powerhouse” by 2020 through an emphasis on human capital. Approximately 7 million Chinese citizens will graduate from college in 2014, up from just 1.1 million in 2001, and the country wants to lure back Chinese-origin scientists working abroad. China’s increasing number of academics have pushed China up in global rankings of published science and engineering papers: The country was 14th in 1995 and by 2007 was second only to the United States. 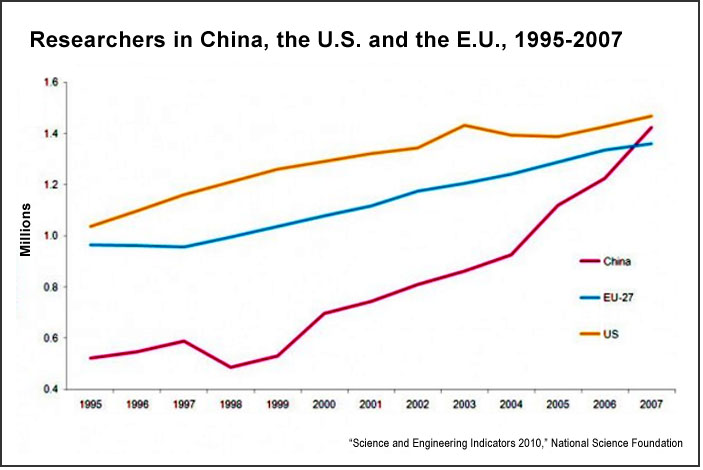 But the number of researchers and the amount of research are only part of the equation. While several Chinese-born scientists working in the West have won Nobel Prizes, none have won for research conducted in mainland China. And the dominant role that China’s government plays in R&D spending has downsides as well: “To obtain major grants in China, it is an open secret that doing good research is not as important as schmoozing with powerful bureaucrats and their favorite experts,” two Chinese university deans wrote in a 2010 Science magazine editorial. In July 2014, the country’s anti-corruption watchdog said it “had uncovered fraud in research grants managed by China’s Ministry of Science and Technology and at prestigious Fudan University.” The journal Science exposed in 2013 an academic black market in China involving “shady agencies, corrupt scientists, and compromised editors” dealing in the authorship of academic papers included in Thomson Reuters’ Science Citation Index.

A 2014 study published in the U.S. Proceedings of the National Academy of Sciences, “China’s Rise as a Major Contributor to Science and Technology,” looks at the development of science and technology in China since the 1980s. The researchers, based at the University of Michigan and Peking University, compare China and the United States in “science and engineering (S/E) labor force size, S/E degrees, government policies and investments, and scientific output and impact.”

The researchers conclude that China has taken a major role in world science and technology after three decades of fast growth in the field. “Four factors favor China’s continuing rise in science: a large population and human capital base, a labor market favoring academic meritocracy, a large diaspora of Chinese-origin scientists, and a centralized government willing to invest in science.” But the country’s development of science and technology is still facing severe challenges including “scientific corruption and fraud” and the country’s “rigid, top-down administrative system.” Further, the authors note, “Even if the government succeeds in preventing misdeeds among officials, it still faces difficulties valuating the true merits of scientific contributions.”

Related research: A 2013 study in the Socio-Economic Review, “Is There an Asian Model of Technological Emergence?” uses a Social System of Innovation and Production (SSIP) framework to examine the institutional environments for technological development in 27 emerging countries. One of the key findings is that the majority of emerging Asian countries (Thailand, Indonesia, Vietnam, China, and India) display a “directed model of technological upgrading,” characterized by heavy state intervention, controlled international integration and a state bank-led financial system.