The eye-opening 2011 Census Bureau report on income, poverty and health in the United States spotlights a number of troubling trends in America, including the decline of median income figures.

As the Census Bureau points out in a post on its “Random Samplings” blog, “End of Recession Doesn’t Mean Good Times Return Right Away,” this phenomenon is not unusual following a significant economic downturn: “More often than not in recent history, the end of a recession has not immediately led to rising income levels. There have been seven recessions since 1969. In four of them, including the last one, median household income actually declined in the first full year after the recession. On two other occasions, the change was not statistically significant. Only once did it actually increase.”

Here’s the Bureau’s chart illustrating how this has unfolded historically: 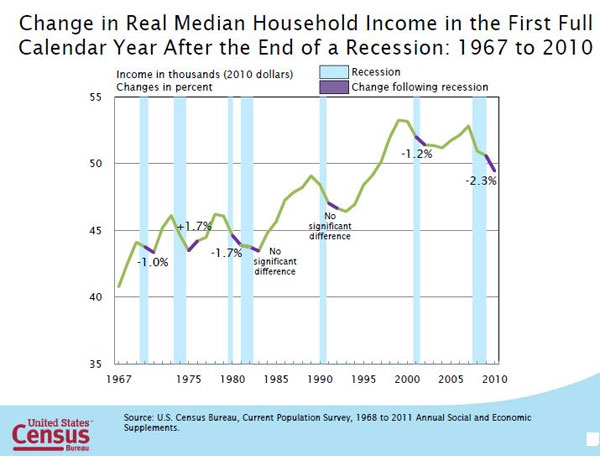 For more research on other dynamics relating to the Great Recession and its consequences, see the following studies: on job searches; on polarization in the job market; on rising wealth gaps among racial groups; and on effects on global trade.