High U.S. educator turnover rates stem in part from reasons such as burnout, the increasing threat of budget cuts and layoffs, an average starting salary of $35,000, more reliance on standardized testing and poor working conditions. There is a vast amount of research on the issue of teacher turnover and how it affects, in particular, urban school systems. Some research has shown that high-poverty urban schools lose as much as 22% of their faculty in a given year; this in turn harms student achievement. Qualitative studies have suggested that teachers in such situations often leave because of lack of school support, not necessarily because of challenging students. Whatever the reason, 15 percent of public school teachers across all districts nationwide left their positions after the 2007-2008 school year — 8% left the profession altogether, and 7% went to other schools — and the rate has subsequently risen.

A factor in teacher attrition that has received little attention is the gender dynamics of school districts. Some policymakers suggest that gender congruence — or same-sex matches — between student and teacher improves student performance and that the recruitment and retention of male teachers is one of the best methods of closing the gender achievement gap. Although women comprised more than 76% of public school teachers, according to a 2011 government report, they represented 59% of primary school and 29% of secondary school principals in the United States as of 2008. To what extent do these dynamics influence who remains in the classroom, and who chooses to leave?

A 2012 study from Vanderbilt University and the University of Missouri published in the Journal of Public Administration Research and Theory, “Does My Boss’ Gender Matter? Explaining Job Satisfaction and Employee Turnover in the Public Sector,” looks at the relationship between principal gender and gender congruence, and teacher satisfaction and turnover. Researchers obtained data from the Department of Education’s Schools and Staffing Survey (SASS) from 2003-2004, as well as the 2004-2005 Teacher Follow-Up Survey (TFS). The data does not differentiate between voluntary and involuntary turnover or account for turnover intention.

The authors note that as more men venture into occupations traditionally viewed as “female work” such as teaching, social work and nursing, gender congruence merits additional study. It is also unclear from the study the extent to which educators who leave a school leave the profession or continue to teach at another school. For more detail on how experience factors into the decision to leave, see this U.S. Department of Education chart: 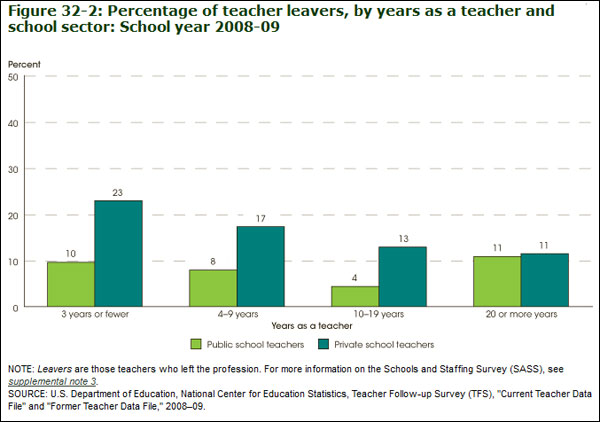