The political debate over how best to reduce the growing federal deficit has focused in large part on how entitlements such as Medicare should be reformed. The 2011 “Annual Report of the Boards of Trustees of the Federal Hospital Insurance and Federal Supplementary Medical Insurance Trust Funds” addresses a number of pressing issues in terms of funding and solvency. (Reports for other years are available from the Centers for Medicare and Medicaid Services.)

The report states at the outset that its estimates are based on the anticipated cost-saving effects of the Affordable Care Act (the major health care reform bill passed in 2010); moreover, it notes that “actual future costs for Medicare are likely to exceed those shown by the current-law projections in this report,” and the estimates are based on certain favorable scenarios in terms of legislative action.

The report defines Medicare’s two main components as follows: “Hospital Insurance (HI), or Medicare Part A, helps pay for hospital, home health, skilled nursing facility, and hospice care for the aged and disabled. Supplementary Medical Insurance (SMI) consists of Medicare Part B and Part D. Part B helps pay for physician, outpatient hospital, home health, and other services for the aged and disabled who have voluntarily enrolled. Part D provides subsidized access to drug insurance coverage on a voluntary basis for all beneficiaries and premium and cost-sharing subsidies for low-income enrollees. Medicare also has a Part C, which serves as an alternative to traditional Part A and Part B coverage.”

Key findings in the Trustees’ 2011 report include: 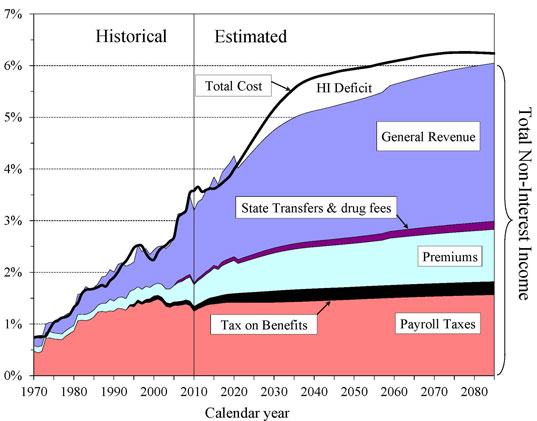 (For a look at the projections and parallel challenges for Social Security, see the Trustees 2011 report.)