The relationship between violent media and real-world violence has been the subject of extensive debate and considerable academic research, yet the core question is far from answered. Do violent games and movies encourage more violence, less, or is there no effect? Complicating matters is what seems like a simultaneous rise in onscreen mayhem and the number of bloody events in our streets — according to a 2014 report from the FBI, between 2007 and 2013 there were an average of 16.4 active-shooter incidents in the U.S. every year, more than 150% higher than the annual rate between 2000 and 2006.

But as has long been observed, any correlation is not necessarily causation. While Adam Lanza and James Holmes — respectively, the perpetrators of the Newtown and Aurora mass shootings — both played violent video games, so do millions of law-abiding Americans. A 2014 study in Psychology of Popular Media Culture found no evidence of an association between violent crime and video game sales and the release dates of popular violent video games. “Unexpectedly, many of the results were suggestive of a decrease in violent crime in response to violent video games,” write the researchers, based at Villanova and Rutgers. A 2015 study from the University of Toledo showed that playing violent video games could desensitize children and youth to violence, but didn’t establish a definitive connection with real-world behavior, positive or negative.

A 2014 study in Journal of Communication, “Does Media Violence Predict Societal Violence? It Depends on What You Look at and When,” builds on prior research to look closer at media portrayals of violence and rates of violent behavior. The research, by Christopher J. Ferguson of Stetson University, had two parts: The first measured the frequency and graphicness of violence in movies between 1920 and 2005 and compared it to homicide rates, median household income, policing, population density, youth population and GDP over the same period. The second part looked at the correlation between the consumption of violent video games and youth behavior from 1996 to 2011. 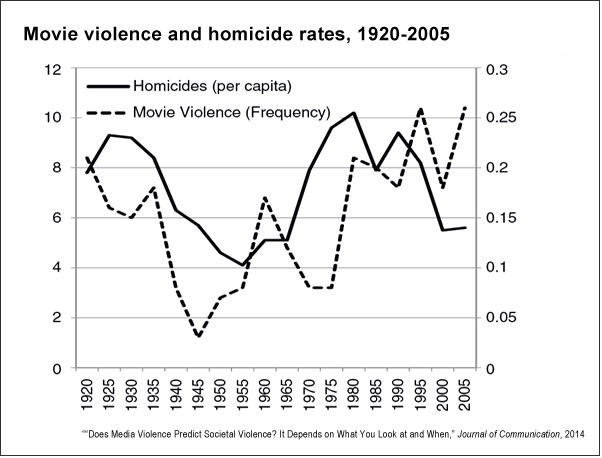 “Results from the two studies suggest that socialization models of media violence may be inadequate to our understanding of the interaction between media and consumer behavior at least in regard to serious violence,” Ferguson concludes. “Adoption of a limited-effects model in which user motivations rather than content drive media experiences may help us understand how media can have influences, yet those influences result in only limited aggregate net impact in society.” Given that effects on individual users may differ widely, Ferguson suggests that policy discussion should be more focused on “more pressing” issues that influence violence in society such as poverty or mental health.

Related research: A 2015 research roundup, “The Contested Field of Violent Video Games,” gives an overview of recent scholarship on video games and societal violence, including ones that support a link and others that refute it. Also of interest is a 2014 research roundup, “Mass Murder, Shooting Sprees and Rampage Violence.”