by Margaret Weigel and John Wihbey, The Journalist's Resource
January 15, 2015

Researchers have been increasingly focusing on the science behind interrogation techniques and confessions — and emerging criminal justice system data patterns — with the hope of better understanding how false confessions are produced and how to limit the chances innocent persons are imprisoned.

The topic of false confessions has again come into the public eye as the University of Michigan and Northwestern University law schools continue to compile data as part of the new National Registry of Exonerations. Scholars with that project note in a 2013 report: “For homicide exonerations, the leading cause of false conviction is perjury or false accusations, mostly deliberate misidentifications. Homicide cases also include a high rate of official misconduct, and 74% of all false confessions in the database.”

As the Wall Street Journal noted in a Sept. 8, 2013 report, National Registry of Exonerations statistics suggest that young people in particular are more prone to admitting guilt for crimes they did not commit. “Thirty-eight percent of exonerations for crimes allegedly committed by youth under 18 in the last quarter century involved false confessions,” reporter Zusha Eilson writes, “compared with 11% for adults, according to a new database of 1,155 individuals who were wrongly convicted and later cleared of all charges.” Indeed, in California, which faces severe prison overcrowding issues, there has been debate about new policies that specifically address the issue of coerced confessions by young people. 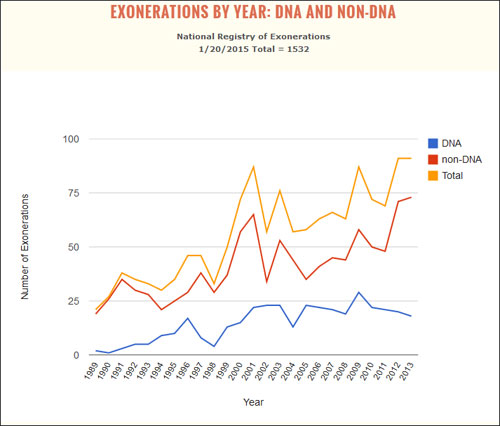 Data produced through experiments are also providing new insights. For example, a 2013 study published in Law and Human Behavior, “Innocence and Resisting Confession During Interrogation: Effects on Physiologic Activity,” performs experiments on innocent subjects to look at the biological realities of being questioned and how stress affects those being interrogated. The findings “suggest that innocent suspects underestimate the threat of interrogation and that resisting pressures to confess can diminish suspects’ physiologic resources and lead to false confessions.”

The current findings show that the state of being actually innocent produces an immediate and fundamental difference in suspects that could set in motion an array of ill-advised decisions and behaviors that could put innocent suspects’ long-term outcomes in jeopardy. It should be noted that the initial physiologic differences associated with innocence and guilt are not necessarily important in and of themselves, but rather are significant because they reflect critical initial differences between the innocent and the guilty in how they differently construe the same situation. The smaller physiologic reactions of the innocent occurring in response to being accused and interrogated signal the experience of less stress, indicating that they perceive themselves to be at less risk — a perception that would discourage taking strong self-protective actions, such as invoking one’s rights to silence and counsel.

Conventional wisdom maintains that the “bluff” — an interrogation technique in which investigators state they have potentially damning evidence but do not claim that this evidence implicates the accused — is of little concern to the innocent falsely accused but can frighten the guilty into confessing. According to The Innocence Project, however, approximately 25% of convicted criminals ultimately exonerated had, in fact, confessed to the crime, as The Economist notes. A 2015 study published in Psychological Science finds evidence that, under lab conditions:

[P]eople can come to visualize and recall detailed false memories of engaging in criminal behavior. Not only could the young adults in our sample be led to generate such memories, but their rate of false recollection was high, and the memories themselves were richly detailed. Additionally, false memories for perpetrating crime showed signs that they may have been generated in a way that is similar to the way in which false memories for noncriminal emotional memories are generated. False memories for committing crime also shared many characteristics with true memories.

A 2011 study published in Law and Human Behavior, “Inside Interrogation: The Lie, the Bluff and False Confessions,” describes a series of laboratory experiments that test how the bluff technique correlates with confessions gained from innocent parties. Subjects were instructed to complete a task, then were falsely accused of a transgression such as crashing the computer or collaborating with a colleague to improve their task performance. The experiment introduced variables such as bluff evidence, false evidence and less-than-honest eyewitnesses to identify which were the most likely to prompt a confession. The study was conducted by Jennifer T. Perillo and Saul M. Kassin of CUNY’s John Jay College of Criminal Justice.

The study’s authors note that “innocent people who stand accused believe that their innocence will become apparent to others … which leads them to waive their Miranda right to silence and to an attorney.” However, they conclude that these experiments “convincingly demonstrate that use of the bluff tactic in an interrogation can induce compliant false confessions from innocent people. Importantly, however, additional research is needed to reassess the predicted effectiveness of the bluff on the true confession rates of perpetrators.”

Related research: The 2010 paper “The Three Errors: Pathways to False Confession and Wrongful Conviction,” by Richard A. Leo of the University of San Francisco and Steven A. Drizin of Northwestern University, provides more insights into these problems in the contemporary criminal justice system context.